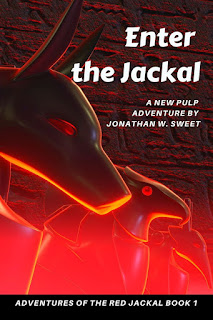 Clad in a blood red costume and wearing the a cowl shaped like a jackal’s head, the Red Jackal metes out justice to all evil-doers residing in America’s Twin Cities of Minneapolis and St.Paul. In reality he is communication mogul, Randolph Blake. A masked vigilante by night, owner of a big city daily and radio station by day. Then of course there is the usual assortment of loyal allies, chief of which is his younger brother Daniel Blake, followed chauffeur Geoffrey and one Detective Lt. McDaniels of the police department. All of them privy to the Red Jackal’s secret identity and crime fighting crusade.

This is New Pulp scribe Jonathan Sweet’s plunge into the wonderful world of masked avengers and with this first volume he lands a perfect ten. Not only is the Red Jackal done in the classic hero style, Sweet’s stories move at the appropriate speed keeping the action moving super fast from page to page.

The book contains four Red Jackal adventures. In the first he rescues a kidnapped heiress. In the second he goes after a serial killer who murders his victims using methods first presented on a weekly radio melodrama. Next the Red Jackal investigates why homeless men are disappearing from the seedy ghettos of his city which leads him to confront a diabolical madman. Finally, Sweet leaves the hero’s actual origin for last. It is a post-World War One adventure wherein Blake finds himself in Egypt on a unique archaeological dig; one that ends in murder and his being recruited by an ancient Egyptian God to become an avatar for the forces of justice in the modern world.

Honestly, we’ve seen quite a few new pulp heroes spring forth like publishing weeds in the past ten years since the establishment of the New Pulp field. Most have been okay successors to those classic characters from the 30s and 40s. A handful have been more than that. They are the worthy heirs to that heritage. You can consider the Red Jackal one of these without reservation. We eagerly await a second volume of his adventures.