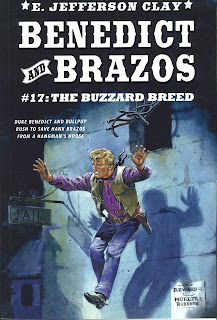 Bold Venture Press continues reprinting one of the finest western series ever produced, the Benedict and Brazos stories. Duke Benedict is a veteran Union officer while Hank Brazos a former Confederate sergeant. Through a strange bizarre incident at the end of the Civil War, the two end up as partners obsessed with hunting down a vicious outlaw name Bo Rangle and his gang. Rangle stole a shipment of army gold and in the process murdered men who had served with Benedict and Brazos. Each new book is the series is part of this longer chase saga.

In # 17, “The Buzzard Breed,” the two contentious saddle partners arrive in the town of Galloway. Only Brazos is brought there in chains, having been picked up on the trail by the sheriff for cattle rustling. Now it is up to Benedict to find and capture the real rustlers and free the rowdy Texan. Along the way, the suave Yankee discovers a conspiracy to steal a nearby cattle ranch from a young woman. It involves not only the cattle thieves but a local saloon owner. A conspiracy responsible for the murder of the rancher’s father.

Once again, E. Jefferson Clay offers up a fast paced, often times humorous, but never dull, cowboy yarn in the grand classic tradition of the early Max Brand and Zane Gray tales. In the end, there’s just no stopping Benedict and Brazos. These books are addictive. 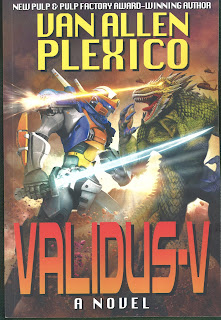 Giant robots battling each other and horrific giant monsters. Ah the stuff of Japanese movies and American comics. And now a wonderful, action packed novel by veteran sci-fi and pulp writer, Van Allen Plexico. This one truly has it all and this reviewer was entertained from the very first page to the last. Having followed Plexico’s writing career over the years, we weren’t the slightest bit surprised at the theme of this new book. If nothing else, Plexico has shown he will not be pigeon holed in any one genre.

We’ve applauded his superhero series, and gone ballistic over his crime thrillers. So again, no surprise when he takes us back to 1978 and a top secret base in the Pacific Ocean where giant robots manufactured by an alien race are discovered. A scientist named Garen pieces together an incredible history of two powerful intergalactic empires, the good Ahlwhen and the power mad Xovaren. Using super science to battle each other across the galaxies, the Ahlwhen built the giant robots while the more barbaric Xovaren created massive organic monsters. One of the hundreds of planets they fought across centuries earlier was earth and upon their departure, they left behind remnants of both these incredibly powerful entities.

David Okada is a high school student in Hawaii living with his maiden aunt, while his older brother John is a navy pilot whom he hasn’t seen in several years. Both were orphaned when their parents passed away. Our tale begins one day when out of the sky, a giant robot lands near David’s school and out of the control “head” room appears John desperately seeking help. Something has infected his units other three robots leaving John the sole “free” agent to battle them. When David comes aboard the robot machine, called Validus-V, he somehow links with it empathically and when John is several wounded in battle with his former allies, it is David who takes command of three foot tall battling machine. Only he remains to somehow save his brother, defeat the other three giant robots and solve the mystery behind their bizarre brainwashing.

This is Van Plexico at his best and the action is non-stop. Not cliché, but here a fact. Combining all out sci-fi thrills with likeable characters, he puts forth elements that in the end come together to produce one of the finest books of the year. If you like top-notch writing, do not pass up “Validus-V.” As for this reviewer, we are so begging for a sequel Mr. Plexico. In the words of Jean Luc Picard, make it so. 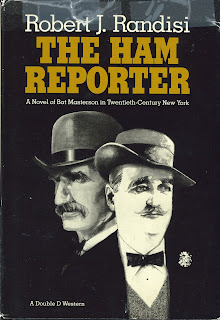 When picking up this volume, we noted the sub-titles being “A Novel of Bat Masterson in Twentieth-Century New York.” Randisi sets his creative imagination post Wild West life and career of the legendary lawman who at one time fought alongside other larger then life figures such as Wyatt Earp and Wild Bill Hickock. Seeing the frontier succumbing to civilization, Masterson and his wife Emma migrated to the booming metropolis on the Hudson, New York City. There the one time law-dog became a popular sports writer and eventual publisher.

As the tale opens, one of Masterson’s colleagues and fellow drinking mates, Inkspot Jones, a sports writer, suddenly goes missing. Attempts to involve his police detective friend, Charles Becker, prove fruitless. It is assumed the writer is simply on some kind of drinking jaunt from which he’ll eventually resurface. Tragically it is the fellow’s corpse that floats to surface thus morphing the missing person case is one of cold blooded murder. Having no faith in police’s ability to solve the crime, Masterson takes it upon himself to find the killer and provide Jones’ widow with some kind of justice.

Aiding him in the hunt is popular paper columnist, Damon Runyon. As the duo of amateur detectives begin to gather information on Jones’ last days, it soon becomes evident that the dead man had crossed paths with one of the Big Apple’s several crime lords. And in doing has suffered the consequences. Soon Masterson discovers the back alleys of the big city are just as dangerous as the streets of Doge City and Tombstone.

“The Ham Reporter” is a brilliant work of historical fiction wonderfully put forth by a craftsman. Randisi’s prose is fun and he spins his tall tale with vigor and affection guiding the reader to a fitting, gun blasting climax. Our copy was picked up at a used book store. Here’s hoping you can find your own. It is truly worth looking for.