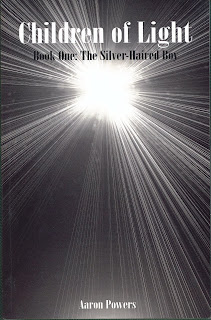 “Children of the Light – Book One – The Silver-Haired Boy” is one of the most enjoyable books we’ve read all year and one that is extremely hard to put down once you start reading. This is what solid, action adventure fantasy is all about. Aaron Powers…remember that name.  You will be hearing it a whole lot more in the future. Count on it.
Posted by Ron Fortier at 11:52 AM 0 comments 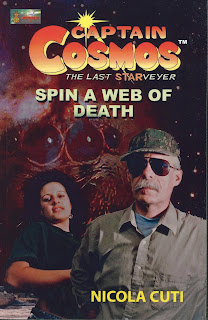 CAPTAIN COSMOS
The Last Starveyer in
Spin a Web of Death
By Nicola Cuti
Nicolaentertainment.com
297 pgs

It would be safe to say most sci-fi readers first encountered writer Nicola Cuti’s work among the pages of comic books. At the now defunct Charlton Comics, Cuit created the hilarious E-Man with artist pal, Joe Staton. His list of credits is far too long to enumerate here. Still we were naturally surprised to see he’d ventured not only into prose writing but also the questionable world self-publishing.

He does so here in his first Captain Cosmos adventure; a character obviously based on himself, were he a bonafide space ranger. This is an out and out old school pulp space opera; the kind most of us encountered while in high school. It is pure fun from the first page to the last. Our hero is a sad-sack, former Starveyer who left the service to start his own freight hauling business. Aboard his ship, Belvedere, he is free to roam the spaceways with his crew among which are Cadet Starling and Zen-ya, an alien beauty.

During one very lucrative run, Cosmos learns that a galaxy wide rescue mission is being assembled to save the inhabitants of a planet about to perish. The world is called Arach and its people, Arachnians, are spider-like beings. Much to the ire of the business man who is employing him, Cosmos has the Belvedere  join the rescue fleet and through a series of odd mishaps ends up being the only ship to actually land on Arach. Once there, Cosmos encounters a Gillian, a lovely Earth Scientist, who agrees to assist them in getting the Arachnians ready for transporting.

Alas the populace of the capital city will not leave unless their Royal Family accompanies them, thus forcing Cosmos and Gillian on a hasty journey into the wild to find the governing clan. Along they way, to and from, they encounter one danger after another as they struggle to complete their mission. All the while Arach’s time grows ever shorter.

“Spin a Web of Death,” is a fresh, no-hold barred, rollicking adventure with tons of action and a wry, satirical humor that elevates it far beyond the average space opera. It is a gem of a story told by a man whose own creativity appears endless. Cuti is one of the best and this wonderful book proves to be another notch in his belt. Please, go out and buy it now. You can thank me later. 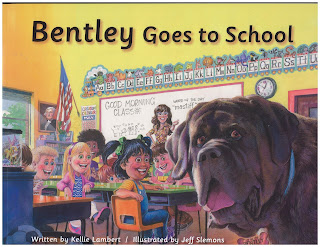 We love children’s books and though this is not the first such we’ve reviewed; it has been a long, long while since the last. What brought about this review is the amazing artwork of Jeff Slemons, a fellow Coloradan who we know mostly for his automobile cartoons and comics work. Quality children’s books are artistic gems, both for their succinct economy of storytelling and their imaginative illustrations. This book has them both.

The plot is simple enough. Bentley, our hero, is a big 200 pound brindle, English Mastiff. Brindle refers to the striped cologing on his body. He belongs to Kellie, a school principal and one day she takes Bentley to work with her. He immediately falls in love with all the kids. So much so that he wants to go to school every day. He learns that would be possible if he were a Therap Dog. Bentley immediately goes to training school to learn this very important job, working very had to achieve that goal and get his wish; to go to school every day.

“Bentley Goes To School” is a charming, delightful story that will entrance both young and old alike. Kellie Lambert and Jeff Slemons have given us a treat with this fun story about a pretty amazing dog. We loved this book and if you’re an animal lover, so will you.
Posted by Ron Fortier at 5:23 PM 0 comments 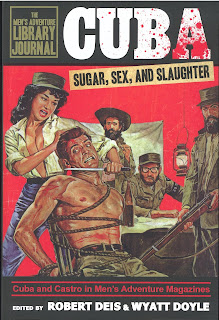 Once again Bob Deis & Wyatt Doyle have released a new anthology from their series; “The Men’s Adventure Library Journal” titles. As ever, they’ve dug into their amazing collection of vintage Men’s Adventure Magazines (MAMS for short) and put together a series of articles, fiction and illustrations all focused on the theme of Cuba and its bloody history.

It’s a truly weird approach telling the history of people via such articles, but in its own way the tropical island’s very make up seems soaked in pulpish gore and horror; never mind the action and adventure. The pieces are typical sensationalist exposes such as “Havana’s Amazing Flesh Market,” to “Castro’s Commie Blueprint to Take Over Latin America.”

Fiction wise there’s “Bayamo’s Night of Terror,” by Don Hogan. A ghastly account of life in one of Cuba’s worst prison hell-holes.  As for special features, the book offers up some truly wonderful examples of artist Norm Eastman’s work for the MAMS and then there is an all too short pictorial featuring the lovely model Eva Lynd recounting her own one time trip to Cuba.

Beautiful assembled and laid out, “CUBA : Sugar, Sex and Slaughter” is representative of a time when drugstores magazine racks were filled with some of the most lurid, explosive stories ever to grace a pulp page. This book is just another lesson delivered by two experts who really know their stuff.  A welcome addition to any pulp library.
Posted by Ron Fortier at 2:56 PM 0 comments