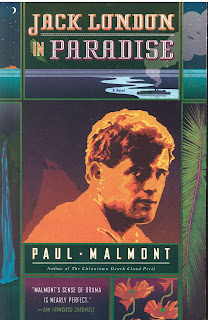 In this book, Paul Malmont imagines London’s last trip to Hawaii which lasted from Dec of 1915 through July of 1916. At which time he and his second wife Charmian returned to their Sonoma ranch in California where he would die four months later, Nov. 22nd.  The tale is a mixture of recorded facts with fictional encounters created by Malmont to weave the tale of a great man’s final days in the place he came to love as a Paradise on earth.

The story begins with silent screen actor turned director and producer, Hobart Bosworth. Having made several movies based on London’s work, Bosworth has fallen on hard times and his small studio is about to be gobbled up by Paramount unless he can produce another winner and alleviate his debt. His idea; have London write an original screenplay that has never been published in print. Bosworth flies to London’s beauty ranch only to learn the adventure writer is gone. Wolf House, the $80,000 stone mansion meant to be the gem of the estate had burned down two weeks before the Londons were to move in. Bosworth discovers his friend is in Hawaii and immediately books passage on a tramp steamer for the islands.

It is clear from the offset; Bosworth is as much a protagonist as is London though little known by today’s audiences. Once the desperate “Dean of Hollywood”, as he was called, finds the world weary and ailing writer, the story becomes about two old friends doing their best to stave off aging and remain the rough and tumble adventurers of their youths. It is about loves, won and lost and the dreams realized and those lost. The characters are all in one way or another broken souls seeking salvation. And what better setting such a tale then the majestic islands which prove to be the ideal background, an earthly paradise in which these lost souls come together one last time before the curtain falls.

We will not soon forget, “Jack London in Paradise.”