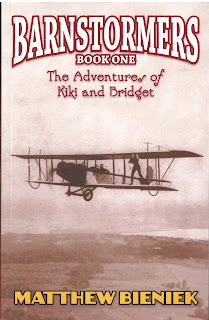 The Adventures of Kiki and Bridget

We are always delighted with New Pulp writers like Matthew Bieniek self-publish. The opportunities available to creators today are wonderful. This new series follows the flying adventures of two college chums, Kristina “Kiki” Hansen and Bridget Doyle who, shortly after World War One, are recruited by a group known as the International Criminal Police Organization. Think of it as precursor to Interpol.

What with their flying skills, the ICPO has the duo hunting a foreign agent known only as The Belgian. Apparently this criminal mastermind’s goal is to subvert any and all new flying advancements for his own purposes. What with air travel gradually becoming economically lucrative, it is clear The Belgian hopes to establish his own corporate flying enterprise and he will do anything to achieve his goal.

Thus Kiki and Bridget find themselves going from one aircraft manufacture to the next in their constant attempts to both uncover and foil their nemesis’ plans at the risk of their own lives. The girls are two of the most likeable pulp heroes ever devised and Bienek puts them through their aviation paces. In fact as a tribute to the old movie serials, many of the chapters in this first book close on a cliffhanger wherein one or both of the ladies is within minutes of doom. Honestly, we loved every single one of these melodramatic moments to the max.

“Barnstormers – Book One – The Adventures of Kiki and Bridget” is available at Amazon in paperback and on Kindle. If you like spills and thrills, and spunky dames who know how to fight, you do not want to miss this one. 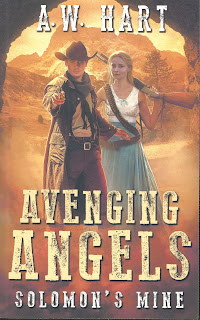 By Chuck Dixon writing as A. W. Hart

For those who came in late, Wolfpack is a pulp-paperback outfit publishing some of the finest western books on the market today. Much like the old pulp mags of the past, the editors at Wolfpack whip up a series concept, create the characters that will be featured and then assign it a house pen-name. In this case, A.W. Hart’s Avenging Angel is a series of adventures featuring brother and sister Reno and Sarah Bass. After their entire family was gunned down by outlaws, the siblings hunted them down and claimed their vengeance. That mission completed, both realized that had developed a rather grisly talent for hunting and killing and so logically accepted their new careers as bounty hunters.

In “Solomon’s Mine,” the pair head for the Nevada and a town called Mollie Wells where they hope to collect the thousand dollar reward for one Butcher Holt. As they travel, they gather information on their target and learn Holt is recruiting a small army of gunfighters, Indians and half-breed killers in order to steal a hidden silver mine being operated by a group of freed slaves. At the end of the civil war, a Jewish landowner named Solomon had migrated west with his former slaves whom he had given their freedom. When they discovered the silver vein deep in the rocky hills, Solomon cautioned his people that its location must be kept hidden. After his death, the small community of blacks continued to maintain their seclusion only sending out a single rider once a month to purchase supplies.

After several years of failed attempts to find the mine, Holt’s patience expired and Reno and Sarah arrive in town within days of Holt’s departure with is gang of cutthroats. He is determined find the enclave and claim the riches for himself, even if it means killing every man, woman and child who get in his way. All of which makes Reno and Sarah’s job a whole lot harder.

A gifted writer with a background in comics, Dixon’s writing is always cinematic. He paints both people and settings with sharp, clear phrases and his plot never lets up for a second. Westerns should always be about good versus evil, hard men and women and tons of gunplay. In “Solomon’s Mine” Dixon delivers on all count. This is a whopping fun read. Saddle up, partners and don’t miss it.

THE AVENGER - THE SUN KING 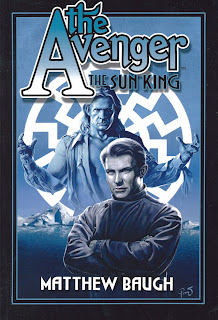 THE AVENGER – The Sun King

Pulps were by no means a strictly American experience. All one has to do read is the stories of the French Arsen Lupin or England’s Bulldog Drummond to realize action adventure novels proliferated across the glove from their inception. Whereas one of the most notable such heroes, dare we say notorious, was Germany’s own Sun Koh; who was their version of a Doc Savage styled science-genius adventurer. Later much was made of his being the poster child for the Nazis’ blonde-haired, blue-eyed Aryan superman.

That Sun Koh continues to fascinate readers is evident by how many of the best New Pulp writers have brought him into their tales. Joshua Reynolds, Derrick Ferguson, Art Sippo, Frank Schildiner, Barry Reese and Win Scott Eckert have all taken their turns in interpreting this unique fictional character. Most opted to paint him clearly as a villain except for Sippo, who offered us a more complex figure echoing back his early heroic roots.

In “The Avenger – The Sun King,” Matthew Baugh clearly gives us another bad-guy Sun Koh, though in doing so he purposely explores the deep-rooted, seductive allure of bigotry. That it is impossible for Sun Koh to conceive of true equality among the races is the tragic flaw of his supposed brilliant intellect. It is this weakness that Richard Benson, the Avenger, understands and ultimately exploits in his campaign to stop the Atlantean from causing a catastrophic global disaster.

Baugh knows pulps and his story is beautiful fast-paced and filled with action. He portrays the Avenger’s team wonderfully. Nellie, Smitty, Mac, Josh and Rosabel are all here. Then he sets his adventure right in the middle of the magazine run between issue # 12 and #13 which formally introduced Cole Wilson to the cast. This is a first rate Avenger yarn and we’re thrilled to have finally gotten around to enjoying it. So, what are you waiting for? 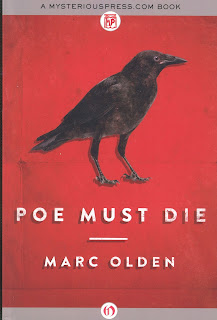 In the dark corners of the occult world, a powerful European psychic named Jonathan seeks the mystical Throne of Solomon; a magical seat of power that will grant him dominion over the entire world including the realms of Hell. But to find the Throne, he must travel to New York and resurrect the dead body of Justin Coltman, another practitioner of the dark arts recently deceased.

At the same time Jonathan is being hunted by a relentless British bare-knuckle fighter named Pierce James Figg, whose wife the magician had slain. For all his abilities, Jonathan fears the boxer on a primal level even he cannot comprehend. When Figg learns the killer has fled to America, he solicits the aid of his friend, writer Charles Dickens. The accomplished author provides Figg with a letter of introduction to the one man who might be able to help him find and defeat the Satanist, Edgar Allan Poe.

Unbeknown to Jonathan, grave-robbers have stolen Coltman’s body and his widow, Rachel, has asked Poe to help retrieve it. Whereas Poe is already enamored with the grieving beauty and battling his own alcoholic demons agrees to act as her representative. Determined to find and claim Coltman’s corpse, Jonathan sets about destroying all who stand in his way. Whereas Figg soon realizes, he has no chance of finding and defeating the monster without the help of the dark-eyed, haunted writer.

Olden is a master storyteller and with “Poe Must Die,” he sets about unveiling a mesmerizing, fast paced drama filled with action, horror and pathos. His depiction of Poe is sympathetic and all too realistic. He offers the readers the portrait of a literary genius whose life was filled with pain and loneliness, all which he captured in his tales and poems that continue speak to us through the ages. This is a truly exceptional novel you don’t want to miss.