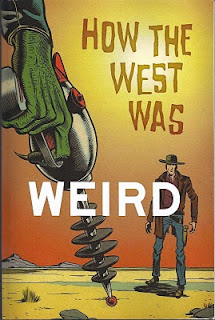 That said, HOW THE WEST WAS WEIRD, is a grand collection that is extremely entertaining and worth your support. In fact, I’m hoping it does well enough to warrant another volume. These are too much fun to end with just one outing.
Posted by Ron Fortier at 7:00 PM 9 comments 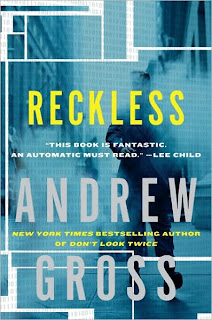 A gripping suspense novel deftly plotted so as to move along at an easy exhilarating pace that never once feels contrived. Each scene seems perfectly set in sequence so that the plot falls together like a series of well lined-up dominoes. All too often, lesser writers are forced to invent outlandish events to justify their heroes’ brilliant deductions. It’s what separates the master scribes from the wannabes, that ability to lay out a plot that unfolds naturally. The pieces fit perfectly, thus allowing the reader to enter the scenario and become invested with the protagonists.

Ty Hauck is a respected ex-detective working as an investigative manager for a prestigious global security outfit. When a former lover, April Glassman, is brutally murdered along with her husband and oldest daughter in a supposedly botched home robbery, Hauck gets involved. His cop instincts telling him it was more than a home invasion gone sour. April’s husband was the chief equities trader for a large Manhattan investment bank and several days after his murder, auditors learn that he leveraged the firm beyond its assets. When it collapses, it sends catastrophic ripples throughout the economic community. Then, within days of these events, a second big money trader commits suicide and once again another reputable institution is brought down. Savvy cops have an aversion to coincidences and Hauck is no exception. He begins to suspect there is a connection between these two untimely deaths and continues his probing until he finds himself the target of a sadistic ex-Army Ranger sent to terminate his investigation.

All the while, in Washington D.C. a low level Treasury Agent named Naomi Blum is discovering similar threads that connect the two dead Walls Street brokers. She begins to suspect they were mere pawns in a larger conspiracy to topple to the U.S. Economy. When she learns of an ex-cop who has gotten himself embroiled in the affair, Blum travels to New York and arranges a secret meeting with Hauck. Once they realize their cases are intertwined, they agree to join forces in unraveling the plot and following it back to its sources.

Soon they are in Serbia tracking down a fugitive war criminal, all too aware that their own lives are also at risk with every move they make. Gross balances wonderful characterization with taut action sequences that are both exciting and credible. Ty Hauck is no James Bond, he’s just a good man looking for the truth while possessing the moral courage to find it no matter where the trail leads, even to the highest offices of the U.S. Government. RECKLESS is an intricately plotted, top-notch thriller and with it Gross easily steps to the head of the class in this already crowded school.
Posted by Ron Fortier at 11:09 AM 0 comments