THE CONDEMNATION OF CROW 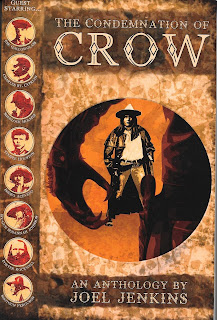 One of New Pulp’s most exciting characters is Indian shaman, bounty hunter and gunslinger, Lone Crow, created by writer Joel Jenkins. The last of his tribe, Crow travels the post Civil-War west encountering all manner of supernatural horrors which he is fates to battle. With this collection, Jenkins brings together ten of Crow’s adventures written over a period of three years.  Each is a gem of weird western thrills.

“True Love” is set in New Orleans immediately after the end of the war and has Crow falling head over heels in love with a beautiful prostitute named Candide only to discover a Mexican gunfighter is also enamored of her. The two agree to a duel to be held at night in a nearby cemetery and it is there they encounter an ages old horror still exiting beneath the ground.

“Shaman” at two pages is easily Joel’s shortest piece ever. Reads as if it was meant to be a connecting thread to other tales. In “The Vorpal Tomahawk,” Lone Crow crossed paths with none other than Sherlock Holmes and Dr. Watson in the Oklahoma badlands. A different kind of encounter for sure. With “Blood For the Jaguar,” Lone Crow and his bounty-hunting partner, Six-Gun Susanna Johnson cross paths with her ex-husband, a gunfighter capable of enducing illusions in others.

“The Summoner’s Sacrifice,” has Crow going to Salt Lake City to investigate the brutal murder of a local business. The victim’s body, torn to shred, was discovered stretched across a crudely painted pentagram and the local constable is afraid the killer is a demon that still might be on the loose. Next up is the “Suicide Ride,” a two page gem about a jilted Indian maid brilliantly delivered. One of the best stories in the collection. With “Dead Before Sunrise,” Crow and friend Shotgun Ferguson find themselves trapped underground in a city of ghouls. Crow and his friends battle alien horrors emerging from a crashed meteor in “It Fell From The Sky.”

At this point in the collection, we come to the only story not written by Jenkins. It is a Charles St. Cyprian story by fellow New Pulp scribe, “The Third Death of Henry Antrim” is a surprise bonus, especially the connection between the Royal Occultist and Lone Crow.

The book’s final yarn, “The Condemnation of Crow,” is the longest and has the Indian shaman working alongside Deputy Marshal Wyatt Earp and Texas Lawyer Temple Houston to battle a weird menace terrorizing Dodge City. All too quickly the trio find themselves in the middle of a war between a corrupt judge and railroad tycoon, one of which is the source of the supernatural force. A page turner and excellent tale to conclude what is a really great pulp collection.  Proving once again that writer Joel Jenkins is star in the New Pulp community.
Posted by Ron Fortier at 3:41 PM 0 comments 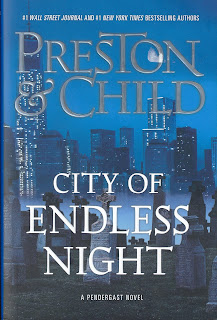 “City of Endless Night” is a clever mystery meticulously plotted and offers up an intriguing puzzle we found wonderfully original. It is a thriller that will keep readers guessing from chapter to chapter until the final confrontation between the inimitable Agent Pendergast and the most brilliant fiend he’s ever hunted. Not to be missed.
Posted by Ron Fortier at 3:41 PM 2 comments