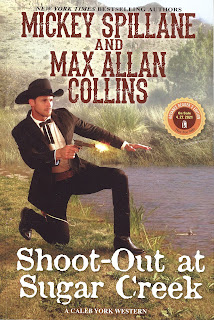 The sixth chapter in the Caleb York series picks up where the fifth ended, with the people of Trinidad New Mexico dealing with the aftermath of the worst winter recorded in the west. Many of the local ranchers, having lost most of their stock, have packed up and left the territory, while Willa Cullen, owner of the big Bar-O, is struggling with a decimated herd and a lack of clean running water to support them. The only unfouled source is Sugar Creek which sits on neighboring Circle G land.

As the story opens, the once abandoned ranch is bought by a beautiful widow named Victoria Hammond, who entertains grandiose plans to become the richest, most powerful figure in the county. Events get off on less than desirable footing when Sheriff Caleb York is forced to shoot and kill Victoria’s youngest of three sons for raping and savagely beating a local working girl. Upon meeting the woman to respectfully report the circumstances of the shooting, York discovers that she has no intentions of allowing any other ranchers access to Sugar Creek. She is also planning on buying out Willa for pennies on the dollar. No stranger to past range wars, York finds himself in the precarious role of peace-keeper, between the woman he loves and the ambitious widow Hammond.

Along about this time, we found ourselves musing over Collins’ ingenuous plot with its echoes of a several classic television settings. Thus far the adventures of Caleb York and Trinidad have seemed much like Matt Dillon in the popular Gunsmoke series. Whereas with this book, he offers up a dark-mirror image of another well known oater, The Big Valley; what with Victoria Barclay (note the same first name) and her three boys. That the two, York and Victoria Hammond are on a collision course is obvious from their first scene together. Then, in his usual masterful touch, Collins ups the ante and violence erupts quickly towards the tale’s second half leaving blisters on our fingers. We simply could not put it down. The end was so Mickey Spillane, it was eerie.

We’ve enjoyed all the Caleb York books but this one clearly stands out as a high mark. Nobody spins a yarn like Max Collins. Nobody.