A COWBOY IN CARPATHIA 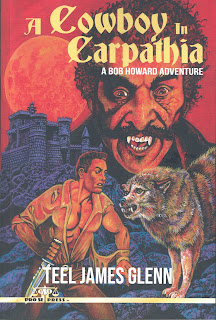 A COWBOY IN CARPATHIA

Every so often a book comes along that is so pulp, it reverberates this fact gloriously on every single page. From inception to excecution and finally in print, it proudly tells the reader this is what true pulp fiction is all about. “A Cowboy in Carpathia” is such a book.

It is a what-if scenario in which writer Teel James Glenn imagines what might have happened if the legendary pulp writer Robert E. Howard had not taken his own life at the age of 30, but rather had gone on to leave his small hometown of Cross Plains Texas to explore the world at large and in so doing actually lived adventures much like those he only fantasized about in his many stories. Ah, the stuff that dreams are made of.

Thus the tale kicks off and soon protagonist Bob Howard is in New York on his way to visit England and then Europe and the world beyond, little realizing his journey will eventually lead him to combat one of the greatest dark forces of them all, Dracula, King of the Vampires. Along the way he will also find the love of his life in a beautiful and brave young lady named Gwendolyn Harker.

What mesmerized us from the beginning was how flawlessly Glenn envisions Howard and the world he never lived. It is there before us, as the rough-hewn writer of pulps, drinks in the world with an insatiable appetite for new adventures while retaining his stunning perceptions of ancient places, battles and heroes. It is a heady blend and Glenn weaves it perfectly in nearly flawless prose. This is one of those rare books where one simply cannot turn the pages fast enough. It may well be the writer’s magnus opus, only time will tell. But until then, we New Pulp fans can only say, thank you.