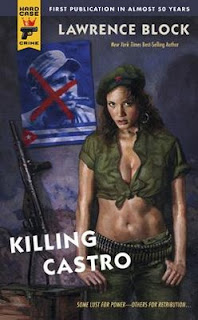 As a writer, Lawrence Block may be the stingiest man in the world. He never wastes a word. His writing is lean and crisp, evoking images swiftly and pushing his narrative along at such a smooth, even pace it becomes seductive. After you’ve read a few of his books, you soon come to realize that in his hands, you are assured a completely satisfying reading experience.

The year is 1961 and Fidel Castro, a one time lawyer and revolutionary hero of the people, is now Cuba’s reigning dictator. Five American mercenaries are recruited by a secret Cuban refugee organization to kill the bearded one. For this deed they will split one hundred thousand dollars. What follows next is a fast paced thriller throughout which Block offers up the actual history of Fidel Castro and his rise to power. It is a marvelous counterpoint against which he paints the characters of five very different men and their motives for taking the job.

Hines, the youngest, is looking for revenge. Fenton, an accountant, is dying of cancer and has nothing to lose. Garth is a mindless bruiser just looking for his next pay check while Turner is trying to escape the law. That leaves the only professional in the bunch, Garrison, a cool, pragmatic killer methodically going through familiar motions. Block’s genius is painting all of them in vivid detail quickly and effortlessly. It’s that economy of words again. A few paragraphs and all five suddenly come to life.

I found it particularly appropriate that Hard Case Crime would reprint this classic thriller at a time when Castro’s health is waning and the world waits to witness the final chapter in his notorious life. I wonder if it will be as dramatic as Block’s book?
Posted by Ron Fortier at 9:32 AM 5 comments

THE SPY WHO CAME FOR CHRISTMAS 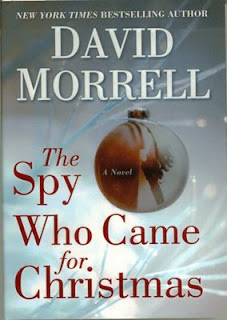 I’m somewhat ambivalent about what I call “gimmick” books. These are novels written specifically around a particular theme or event. Obviously publishers love nothing more than to have Christmas related titles out during this time of the year and I would imagine some editors actually suggest such projects to their authors. This is where the tricky stuff comes into play. Imagine you are David Morrell, one of the finest writers of modern pulp thrillers working today and a friend innocently brings up the idea of your writing a Christmas spy thriller.

Which, we are told in the book’s acknowledgement, is exactly what transpired. Now I am a huge fan of Morrell’s work and when I saw this gaily colored and designed dust jacket on the bookstore’s shelf, I immediately picked it up. But this time with a good degree of trepidation. I already know Morrell can write amazing suspense tales and his action is second to none in the seat-of-your pants category, but a sentimental Christmasy plot? I left the store with some serious doubts and not a little bit of natural reader curiosity.

Of course, being completely honest here, I too fell victim to the fun idea of having a Christmas themed pulp fiction book to review. I’ve never claimed to be impervious to a savvy marketing campaign. Ha.

The book opens on Christmas Eve in the city of Sante Fe, New Mexico. A group of immigrant Russian gangsters from New York, under the employ of Al Quaida, have come to this southwestern town to kidnap an Arab baby; a baby hailed by the world press as the Child of Peace. The father is a Palestinian doctor and founder a very powerful peace movement in the Middle East. Of course there are always those who prefer the world as messed up as it is, as they profit from its suffering. These are the agents of evil who will stop at nothing to prevent this baby from heralding a new peace.

Amongst this gang of ruthless killers is an American spy, Paul Kagan. Born of Russian parents who fled to this country to escape the oppression of Soviet Communism, Kagan has been raised to despise any organization or government that robs people of their freedoms. Able to pose as a Russian outlaw, he has infiltrated the gang and over the years becomes the trusted right hand of the leader, Andrei, a brutal and efficient killer. Still, the things he is force to do to maintain his role gradually begin to eat away at his soul until he fears he will become as corrupt as the forces he battles. But his controllers refuse to allow him to quit, always claiming there is one more threat to be dealt with, one more plot to be uncovered.

Thus, on this Christmas Eve, in the middle of the kidnapping, something inside the Kagan snaps and he rebels. He snatches the baby away from the Russians, killing one of them in the process and flees into the crowded streets, but not before being shot in the arm as he escapes. And thus begins the chase that is the book’s main plot and one I guarantee you will keep you turning pages as if they were on fire. Soon the wounded and desperate spy takes shelter in a modest home where he encounters a battered young mother and her son. The three quickly become allies and set about turning the house into a defensible fort to repel the coming siege. All are determined to save the baby, even at the cost of their lives.

Morrell is a marvelous storyteller and he revels in retelling the classic Nativity Story in this fresh and fantastic manner. By the time the book’s action finale rolls around, he has created a powerful scenario that hinges on the philosophical tenet that the bravest among us are the peacemakers. In the end, Kagan’s salvation depends on his ability to trust his enemy, to see him with fresh and forgiving eyes. Whereas in that microcosm between two men, Morrell paints the real challenge of all mankind, do we have the courage to trust? Christmas tells us we can.

Finally, I want to thank all of you. Because of your repeated visits to Pulp Fiction Reviews, this endeavor has become more rewarding than I ever dreamed possible. Over the past two years thousands of you have stopped by to read these reviews, discuss them and, to my happy surprise, gone out and purchased the books. Publishers have taken note, as have writers so that my mail box is always filled with new books because of your support. Thank you and Merry Christmas to all of you. Now make yourself a cup of eggnog and go read a good book.
Posted by Ron Fortier at 11:53 AM 0 comments 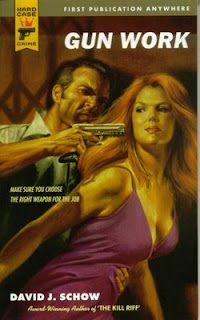 Barney is a gunman. He makes his living as a firearms expert. There is very little, outside a few close friends that he values in this world except his skill and knowledge as a shooter. When an old Army pal from his days in Iraq calls to say his wife has been kidnapped in Mexico City and is going die, Barney’s sense of loyalty propels him into a deadly nightmare mission to save her. What Barney doesn’t realize, until it is too late, is that he is merely a pawn in a larger operation. He’s been duped right from the start. His noble efforts leave him a prisoner in a Mexican hellhole where he is tortured repeatedly by men who enjoy their work.

Through a strength of raw will, Barney manages to survive his ordeal and escape, but not before being horribly mutilated. By the time he returns to his home base in Los Angeles, he is consumed with an all encompassing hatred and need for revenge. He recruits three shooting buddies, men who understand guns and know how to use them, to help him obtain that bloody vengeance. As this book charges into its final chapters, the action explodes across the pages with a riveting, all too realistic battle royal. Bullets fly and bodies fall!

GUN WORK is not for the squeamish and reminded me a great deal of those classic 1950s Men’s Sweat magazine adventures. It’s a story about a man who thought he had nothing to live for until he comes within a breath of dying and then hate becomes his motivating obsession. David J. Schow writes pulp like nobody’s business. This one is the real McCoy!
Posted by Ron Fortier at 7:13 AM 3 comments 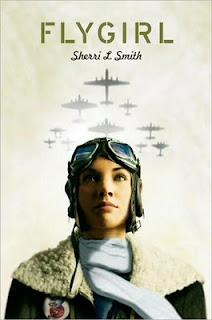 Smith’s research is flawless and she vividly recreates the daily life of a WASP. For the most part, these brave young women were given very little credit by their male counterparts, when all too often they performed to higher standards then the men. Time and time again, WASP pilots were put to the test and their skills and courage always won out. Thus Smith weaves both a marvelous historical narrative that is one hundred percent factual with a warm and endearing fiction. It is a seamless tale that is both sad and inspiring. FLYGIRL is one of those rare books you wish would never end and Ida Mae Jones is a character you will never forget.
Posted by Ron Fortier at 6:10 PM 4 comments