MURDER IN THE MIRACLE ROOM 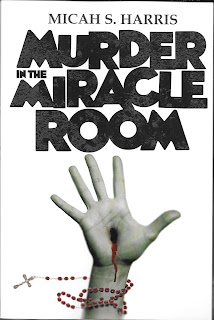 Young April Gurley was a typical Southern young lady living in Tar Forks, North Carolina when she developed the stigmata; the bleeding of her palms resembling the wounds of the crucified Jesus. The news of this made her a celebrity among the religious fringe groups. Then before she can adjust to this new life in the stoplight, April and her father are in an automobile accident and she is left in a coma. Her father, one of the town’s wealthiest entrepreneurs, hires round the clock care for his only child to include nurses and health care providers. One of the latter is Twyla Chayne, one of April’s high school friends whose job it is to bathe her daily and see to her linens etc. while the nurses handle the respirator machine that keeps April breathing and the I.V. tubes that provide her sustenance.

The entire process soon becomes routine for this little group. Twyla, the book’s protagonist is comfortable with her position; though like everyone else, she prays for a day when April will awaken. Meanwhile a bit of a eccentric, Twyla lives in fear that she’ll die of spontaneous combustion, a fate that supposedly befell her Aunt Grusilla a few years earlier and resulted in sending her Uncle Tate to prison. Tate continues to claim that Groo actually came from a long line of people who died in this fiery manner and Twyla, though a rational person can’t completely shake the idea that it might all be true.

And then one day she arrives at the Gurley mansion to discover someone had unplugged the respirator and allowed April to die. Like the other members of the small staff, Twyla becomes a suspect in the murder; a fact she is unwilling to accept passively. She begins doing her own investigation.  Thus starts one of the most off-beat, original mystery novels we’ve ever read. As the gusty Twyla goes further with her own digging into the murder, she also begins to build a list of possible culprits.  Among these is her Uncle Tate, who she learns had been paroled only weeks before April’s death. Then there is her old beauty queen pal, Lorna who has become some kind of international thief traveling around the world stealing religious artifacts under the orders of the Virgin Mary who speaks to her through various mediums.

Believe us, writer Micah Harris has a knack for throwing in unexpected curves while at the same time bringing forth some of the most colorful characters ever to populate a mystery novel.  “Murder in the Miracle Room” is truly unlike any other story we’ve ever come across and we enjoyed it immensely. Oh, that other writers were this fresh and inventive.  The plot is a pretzel knot that when it begins to unravel will have you both scratching your head in wonder and smiling from ear to ear. If you love mysteries, then it’s time you met Twyla Chayne.  Once you done so, we swear you’ll never forget her.