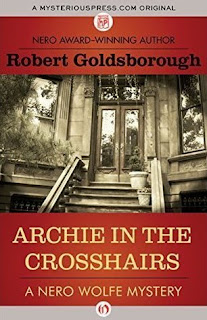 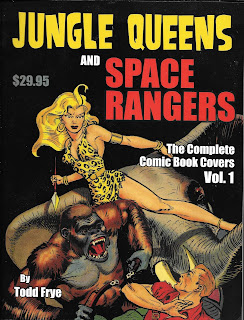 Earlier in the year we had the extreme pleasure of reviewing super pulp & comics fan, Todd Frye’s book “Amazing! Astonishing! Weird Tales! Complete Pulp Magazine Covers Vol 2” and we ranted and raved at how much fun that treasure chest of visual delights truly was. Well, now comes this new huge collection of cover reprints and this time Frye is shining his spotlight on early comics whose theme was jungle queens and space rangers.

He starts the book focusing on three Fiction House titles; Fight Comics, Jumbo Comics and Jungle Comics in dealing with those series that dealt jungle adventures. It is important to note that all three titles where in fact anthologies and aside from their jungle heroes, who often hogged the covers, they also included strips of various genres that offered up fast, action paced yarns to keep young boys turning the pages. Among these pre-war titles that would continue into the early 1950s you’d find the art of such notable artists as Will Eisner, Matt Baker, George Tuska and Jack Kamen.

From its start in Jan 1940, Fight Comics featured a bunch of great, brawling heroes who easily lived up to that title. Each monthly issue offered up the exploits of Shark Brodie, Kayo Kirby and Chip Collins and others of the same mold. The October 1941 issue even introduced a new star-spangled, shield carrying hero named the Super American. By the war years a majority of the book was given over to combat stories featuring American GIs in both Europe and the South Pacific theaters of operation. Then in 1947 Tiger Girl appeared; a blond haired hellcat in a leopard print bikini whose jungle adventures would grace the covers from that point on until the books demise in 1954. Armed with either a knife or spear, Tiger Girl fought every imaginable jungle threat one could envision, from beasts to cannibal tribes, voodoo witch doctors etc.etc. It was heady stuff indeed.

Still, Tiger Girl would take a back seat to yet another jungle beauty with golden tresses, that being Sheena, Queen of the Jungle, whose comic home resided in Jumbo Comics. Appearing on the newsstands in 1938, Jumbo was a whopping anthology book that advertised 64 full pages in color all for a dime. It still boggles the mind. The first eight covers were a hodgepodge of cramped images giving the readers a tease of every single character that appeared in that particular issue. Sheena was most certainly among that gathering but it wouldn’t be until the March 1940 issue that she would grab the full cover spot and from that point on there was no looking back. The ultra sexy Sheena’s covers were dramatic and totally eye-catching. During the titles’ run, she battled monstrous lions, tigers, giant snakes, bizarre bug-creatures and even dinosaurs…while never looking at the least bit unglamorous. We should also note that all these jungle comics existed pre-code and so there was often lots of blood-letting on display. One cover has Sheena repeatedly stabling a gorilla and its chest is smeared with oozing blood.

Sheen would eventually cement her role as a cultural icon when she jump to television on the 1950s and many years later appeared in a full length feature motion picture. It is also interesting to note that the size of Jumbo, by the early 50s was already down to just 52 pages and would shrink even further as time went on.

Of course sexy blonde females weren’t the only larger than life heroes in the jungle comics lore. In Jan. 1940 Fiction House launched the appropriately titled, Jungle Comics and on its very first cover it feature a male Adonis with blond hair named Kaanga, Lord of the Jungle. This yellow haired Tarzan clone would be the book’s main feature throughout its entire life culminating with its final issue, # 163 appearing the summer of 1954. Whereas in this series it was the buffed Kaanga who was the blond, then it seemed natural that his own lovely vine-swinging mate in a leopard bikini sport long raven colored tresses ala Jane Russell. Like the other pre-code titles, violence ran rampant on the covers of Jungle Comics. One has an arrow piercing through the chest of a native warrior as shot by Kaanga in the background as the villain was about to stab the Jungle Lord’s mate. Not for the squeamish and faith of heart were these grand and glorious four color mags.

The second half of this volume is devoted to two of Fiction House’s most popular titles ever. Planet Comics was the first such ever devoted solely to sci-fi and from 1940 through to the winter of 1954, it published some truly amazing covers that are highly sought after by collectors today. Featured where many scantily clad ladies firing ray-blasters at all kinds of alien bug-eyed creatures. Some of the more popular ongoing series features within its pages were Space Rangers, Lost World and Mysta of the Moon. Along with the previously mentioned golden age artists, Planet Comics also showcased the early efforts of the great Murphy Anderson.

And finally, this amazing treasure trove ends with the complete covers of Wings, another Fiction House title that had begun its life as a popular aviation pulp and morphed into a very successful comic. It featured some truly dramatic air-combat scenarios and naturally during the war years, each pitted brave allied pilots against either German or Japanese fliers. Skull Squad was a recurring strip along with Captain Wings and Phantom Falcon. After the war, the antagonists battled by these stalwart heroes were mostly Commies. It’s also interesting to point out that during the war years, few females appeared on its covers but after 1946, more and more, in typical “good girl” cheesecake fashion were featured. Obviously with peace time, it was once again okay to ogle a shapely leg, even if the poor lass was falling through the sky at the time.

How Todd Frye manages to find and reproduce these hundreds of wonderful comic book covers is truly a wonder and we fans are the richer for his Herculean efforts. “Jungle Queens and Space Rangers : The Complete Comic Book Covers Vol. 1” should be in every serious collector’s library. Mine now rest on my shelves where we plan to pick it up again and again just to flip through those pages and soak in the fun that was the Golden Age.  You will too.