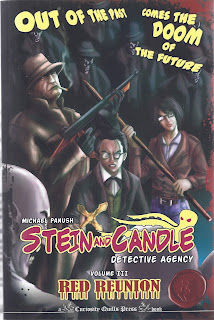 From the talented imagination of writer Michael Panush comes this third volume in the adventures of Mort Candle, a grizzled ex-Sergeant and his ward, the teenage occult expert Weatherby Stein.  Panush continues to chronicle their post World War II exploits as paranormal investigators and within these pages you’ll find the duo’s newest exploits as they travel the globe encountering all manner of supernatural monsters.  There are a total of six cases set forth here and each is a well presented pulp actioner, all worthy of the 1930s classics.

The book kicks off with our guys in Japan in “Trouble in Tokyo.”  They are hired by a police detective discover who it is attacking rival Yakuza clans and in the process fomenting a gangland war that could severely hamper the city’s reconstruction efforts.  Soon Candle and Stein aren’t only dealing with sword wielding crooks but a secret ninja clan controlling ancient Japanese creatures of mythology to wipe out their foes.  This one is exotic wall to wall action without let up from beginning to end.

The X-Files meets Happy Days in “Teenage Wasteland” when Weatherby goes undercover in a suburban high school to investigate teenagers meddling with the occult.  Along the way he encounters ethnic prejudices, an athletic bully and a Sandra Dee like blonde beauty that turns his head and melts his heart.  Easily one of the weirder but most enjoyable stories in this series yet.

Then there is “Lounge Lizard” wherein our heroes head for Lake Tahoe to find a missing crooner who has run off with the his boss’ cash. This leads them into a deadly parallel world of dinosaurs and their lizard-men riders.  Exactly the mishmash Panush excels at.  Whereas in “Drac’s Back,” Castle, short on funds, accepts an assignment from a group of American vampires to help them travel to Transylvania and resurrect the greatest bloodsucker of them all, Count Dracula.  Stein is opposed to the idea and has good reason to be.  It doesn’t turn out well.

The fifth tale, “Stein Family Reunion,” has Mort and Weatherby in San Francisco encountering Adam, a monstrous individual created from parts of dead bodies by an earlier member of the Stein clan.  Thus do our heroes come to the aid of one of the most iconic monsters in English fiction.  After introducing Dracula to the series, we just knew “the monster” couldn’t be far behind.

The book wraps up with “Big City Showdown,” parts one and two and is the longest single Stein and Candle adventure yet.  And it deserves that extra space as it has a sense of climatic finality to it.  Dracula and the Stein’s twisted wizard ancestor, the Viscount Wagner Stein, team up in New York with an audacious plan to conquer America.  The challenges these two powerful entities posed singularly proved to be difficult to our heroes in past encounters.  Now combined, they are virtually unbeatable; unless that is, our two occult detectives can assemble their own team to battle them.  And this is exactly what transpires until almost every major supporting character in the series reappears for this one cataclysmic confrontation between the forces of good and evil.

There is a definitive air of closure by the story’s end that had this reader both pleased and sad.  If this is the end of the Stein and Candle Detective Agency, then they go out on a grand note that we applaud.  But we truly hope this isn’t the last chapter in one of New Pulp’s most imaginative series ever created.  Please, Michael Panush, we want more! 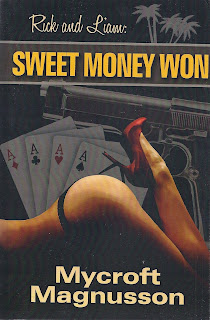