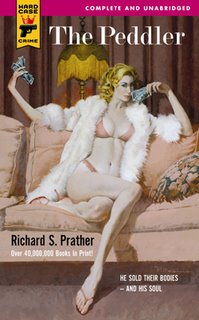 First published in 1952, this book tells the story of a young, , street punk named Tony Romero who wants to make it big in the criminal world. Through an old girl friend turned hooker, Tony is introduced to the local mob that operates all the houses of prostitution throughout the City-by-the-Bay. Like an itch he can’t scratch, Tony obsessed about rising in the ranks, making a lot of money and becoming a big-shot.

Although this book is terribly dated, especially in lieu of the meteoric rise of legal pornography in the later 60s and 70s, it still paints a very brutal and authentic account of modern day flesh-peddlers. Tony’s blind ambition is his Achilles Heel and reading through this tale, I was reminded of all the terrific gangster movies of old, ala SCARFACE and LITTLE CEASAR.

THE PEDDLER still stands up today as a gripping story of crime, immorality and the illusionary good life it promises but seldom delivers. 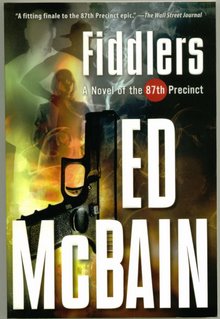 In 1956, Ed McBain had his first novel of the 87th Precinct novel published. It was COP HATER and it introduced the world to an eclectic cast of detectives we would all come to know and love in the years to come. In fact, before that year was over, two more books in this new police procedural genre would follow; THE MUGGER and the THE PUSHER. It was the beginning of an incredible, long-lived publishing phenomenon.

For the next fifty years, McBain would thrill his readers with novel after novel detailing the daily lives of his cast who worked out of the fictional Eastern seaboard city of Isola; a thinly disguised New York City. And with each new book, the series became more and popular until McBain had a legion of loyal fans. I was one of them. Over these fifty years I got to know Detective Steve Carella, his beautiful, deaf wife, Teddy and eventually their twins, Amy and Mark. I also became intimately acquainted with the other bulls of the 8-7. Steve’s Jewish partner, the bald domed Meyer Meyer, who’s father thought it hilarious to stick his kid with the same first and last name. There was Cotton Hawes, the big, towering redhead with the streak of white through his hair, where he’d been cut by a butcher’s knife. Bert Kling was the youngest and the pretty boy of the group who kept getting into tragic romantic entanglements no matter how hard he tried to make love work. These and a dozen other sub-character to include the beautiful Detective Eileen Brennan and Fat Ollie Weeks were real people to me and millions of others.

So successful were these books that they spawned a plethora of related tie-ins from an 87th PRECINCT monthly magazine to a comic book that was based on a short lived TV series with Robert Lansing. There were numerous movies made from the books, to include FUZZ where, the then popular, Burt Reynolds played Carella. Later, the mysteries would be adapted to half a dozen made-for TV movies. Even as short as a year ago there were rumors buzzing around the net that A & E was considering doing another weekly series.

Fifty years and fifty-five novels. The last one, THE FIDDLERS, was released last December, a few months after McBain’s death. It was a difficult book for me to read because I’d invested so much of my own life into this series. As I went through this book, the realization that there would be no others to follow was truly a depressing shadow over my shoulder. Still, once into the first few pages, I was once again caught up in the magic of a master storyteller. McBain’s gift for words, for characterization were still as strong as ever. He wrote flawlessly, as if it was the easiest thing in the world to do. Any writer worth his salt will tell you what a lie that is. That was the enormity of the man’s gift, and now it is gone.

When a blind pianist is gun downed in an alley, behind the restaurant where he works, Detectives Carella and Meyer catch the call. Upon investigating, they learn the man was blinded in long ago and led a pretty quiet and private life. None of his associates have any idea why anyone would want to harm such a harmless old soul. Several days later, a fiftyish divorcee is found murdered in her apartment, shot with the same gun that killed the old fiddler. The body count is rising and there appears to be absolutely no connection between the two victims.

As the case unravels, more seniors are murdered until the boys from the 87th begin to wonder if they have some kind of perverted serial killer on their hands. As the pieces of the puzzle begin to come together, McBain weaves in the personal lives of his cast of regulars. Carella’s daughter, now a teenage beauty, is starting to get caught up with the wrong crowd at school and he and Teddy are very concerned. Kling has broken up with his latest lover, a beautiful black doctor and he is lost to understand why he keeps messing things up. Meanwhile Ollie Weeks is very much falling in love with Hispanic Officer Patricia Gomez, who, despite his girth an uncouth mannerisms, seems sincerely attracted to him.

By the time the killer is caught and the case closed, I found myself content and happy that McBain ended on a magnificent high note. THE FIDDLERS is a terrific read and as always insightful in the layers of human psychology it exposes. There are no cardboard people here; but living, breathing and dreaming souls just trying to get by day by day. As do the men and women of the 87th Precinct. As I closed this final chapter, I imagined them out there, still going on. Still living their lives, as created by a wonderful man with a true gift of imagination.

Good-bye, Ed McBain, and thanks.