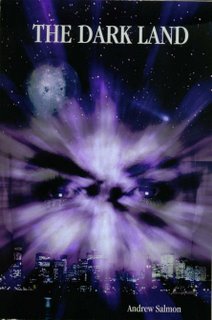 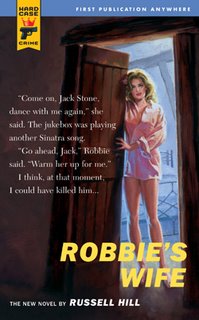 THE WAR OF THE WORLDS MURDER 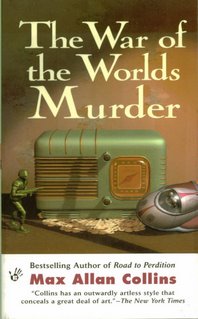 Recently there has been a lot of good press concerning the publication of Paul Malmont’s book, THE CHINA DEATH CLOUD PERIL. It seems that all of pulp fandom has been enamored by this fictional account whereby writers Walter Gibson and Lester Dent experience a real adventure vis-à-vis those they created paper. I was one of those reader/critics who loved that book and recommended it to all my pulp loving friends. Well, I’m here today to showcase another book that does the same thing as Malmont’s effort and just as well. Unfortunately this one did not have the luxury of a being a hardcover or getting a marketing blitz to make P.T.Barnum envious as the other did. Which is the real crime here and one I hope to help correct.

THE WAR OF THE WORLDS MURDER is one in a series of murder mysteries set against the backdrop of an historical disaster; all written by the master of this genre, Max Allan Collins. Previous titles in the series were THE TITANTIC MURDERS, THE HINDENBERG MURDERS and THE PEARL HARBOR MURDERS to name a few. Now the twist with this particular entry is it tells the story of the most famous bogus disaster of them all, the 1938 War of the Worlds radio program devised by Orson Welles and his Mercury Theater of Air for CBS.

Those of you unfamiliar with that event should immediately dig out your history books or Google and do some reading. On that All Hallow’s Eve, Welles and his cast dramatized H.G.Wells
Martian invasion tale as if it were real and they were news broadcasters bringing the horrifying details to the public. By altering Wells story to a modern setting, the Martians landed in a farm field in , the inventive Welles and his crew were able to convince thousands of listeners that we were actually under attack. Hundreds of families packed their kids and belongings into their cars and headed north with all possible speed, clogging up major roadways leading to and from the New Jersey area detailed in the bogus reports.

To be fair, Welles had read a disclaimer explaning the dramatization at the start of the program, but the those people who tuned in late were not privy to that announcement and believed every terrorizing word they heard that night. That this mass hysteria did not cause a single loss of life was nothing short of a miracle. Once the hoax was revealed, the authorities clamored for Welles’ head on a pike, but after a few days, the furor slowly died down and people began to appreciate the dark humor that had so thoroughly tricked them.

Into this setting, Collins plants pulp writer, Walter Gibson, the writer/creator of THE SHADOW. Welles contacts Gibson at his retreat and invites him to to work on a proposed screenplay for a Shadow movie that he wants to produce. Gibson, eager to meet the young boy-wonder, agrees to come down. He arrives two days before

Halloween and immediately gets caught up in the War of the Worlds presentation. Collins has fun with Gibson and sketches the writer/magician expertly. He’s clearly a fish-out-water around Welles and his troop of actors, but relishes being among them like a kid in a candy store. He is unaware his role is about to change dramatically.

An hour before the show is to go on the air, a missing young woman, the studio’s receptionist, is found murdered in an empty broadcast room, her throat cut. The weapon by her body, a keen edged blade, belongs to Welles. Shocked by the discovery, Welles turns to the famous mystery writer and pleads with him to solve the murder and clear his name. Thus, as the Welles sets about scaring the wits out of , Walter Gibson goes on a hunt for a killer who may still be roaming the cavernous halls of the Columbia Broadcasting building.

THE WAR OF THE WORLDS MURDER is just as much fun as THE CHINA DEATH CLOUD MYSTERY and actual trumps it in one important detail, the main plot background is real and actually happened as described. Whereas most of Malmont’s book is pure fabrication. If you are one of those many people who picked up Malmont’s book, then do yourself a big favor and find THE WAR OF THE WORLDS MURDER. It’s like visiting an old neighborhood again, one where you always had a rollicking good time. 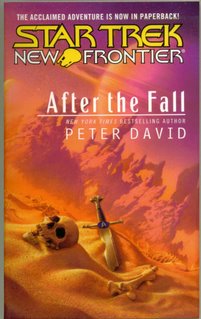 Having said all that, I do have to add that the books do not stand alone all that well. Each is a continuing chapter in an ongoing saga. So, although AFTER THE FALL, is a terrific read, unless you've read the previous books, you are going to be completely lost as to who these people are and what they are about. Still, if you like fast paced, absolutely unique and powerful characters, then I would urge you to make the effort; find those early books and jump on board. It's one hell of a fun ride. One Roddenberry would have truly appreciated.
Posted by Ron Fortier at 6:17 AM 3 comments