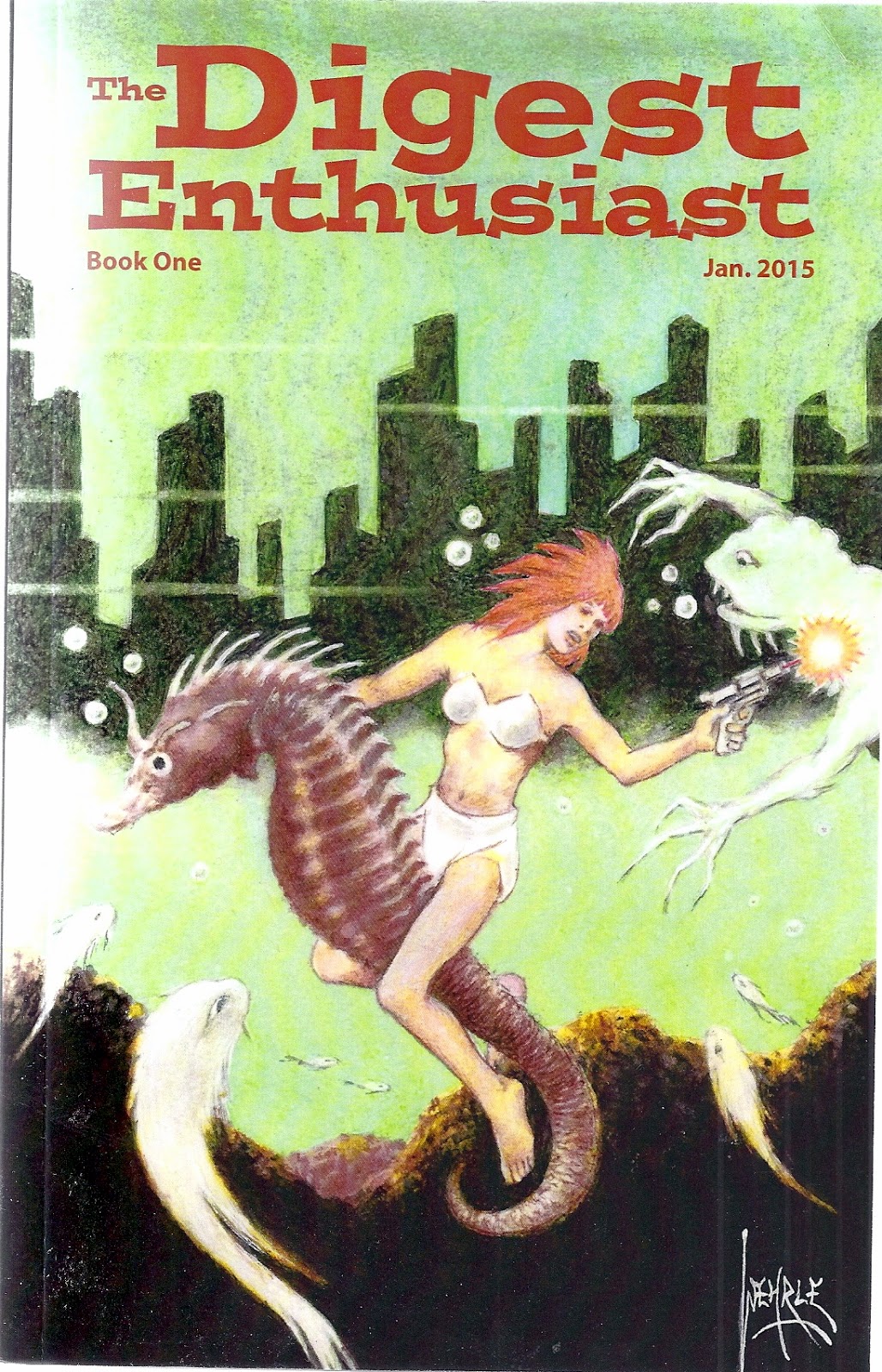 Growing up in the 50s and 60s, we were lucky enough to enjoy all the wonderful little magazines available on the newsstands during those decades.  They were called digest and they covered every genre imaginable.  We fondly remember having subscriptions to both The Worlds of If and Analog; two of our favorite sci-fi monthlies.  Every now and then we’d pick up a mystery digest like Alfred Hitchcok and Ellery Queen as well.  It seemed whenever any particular mystery series made it big in the paperback field, invariably there would be a digest monthly. I can still recall picking up copies of The 87th Precinct Mystery Magazine and Shell Scott Mystery Magazine.  Both were short-lived, but not so the popular Mike Shayne Mystery Magazine that, as best I can remember, was around for a long time.

Today the digests are all but gone save for a handful.  Which is why we were delighted to see the arrival of a brand new title that is actually devoted to those great little monthlies; The Digest Enthusiast.  Issue number one is an eclectic treasure of both factual article on specific digest titles of old, a review of another little series, The Paperback Parade, and three really excellent short stories done in various lengths by writers Joe Wehrle Jr, Lesann Berry and Richard Krauss.  We hope this inclusion of short fiction will be permanent feature and offer new pulp writers another market for their tales.

Among some of the digest title histories examined here are Coronet, Galaxy Science Fiction and Photo-rama to name a few.  We have to confess, our favorite article was the interview with Canadian fan/writer Matthew Turcotte in regards to his collection of Archie Digests which he claims is well over thousand issues strong.  Just amazing.

The Digest Enthusiast is extremely well produced, with clean layouts and clear, expertly printed articles about a lost American publishing format.  We recommend it highly to all our pulp readers. 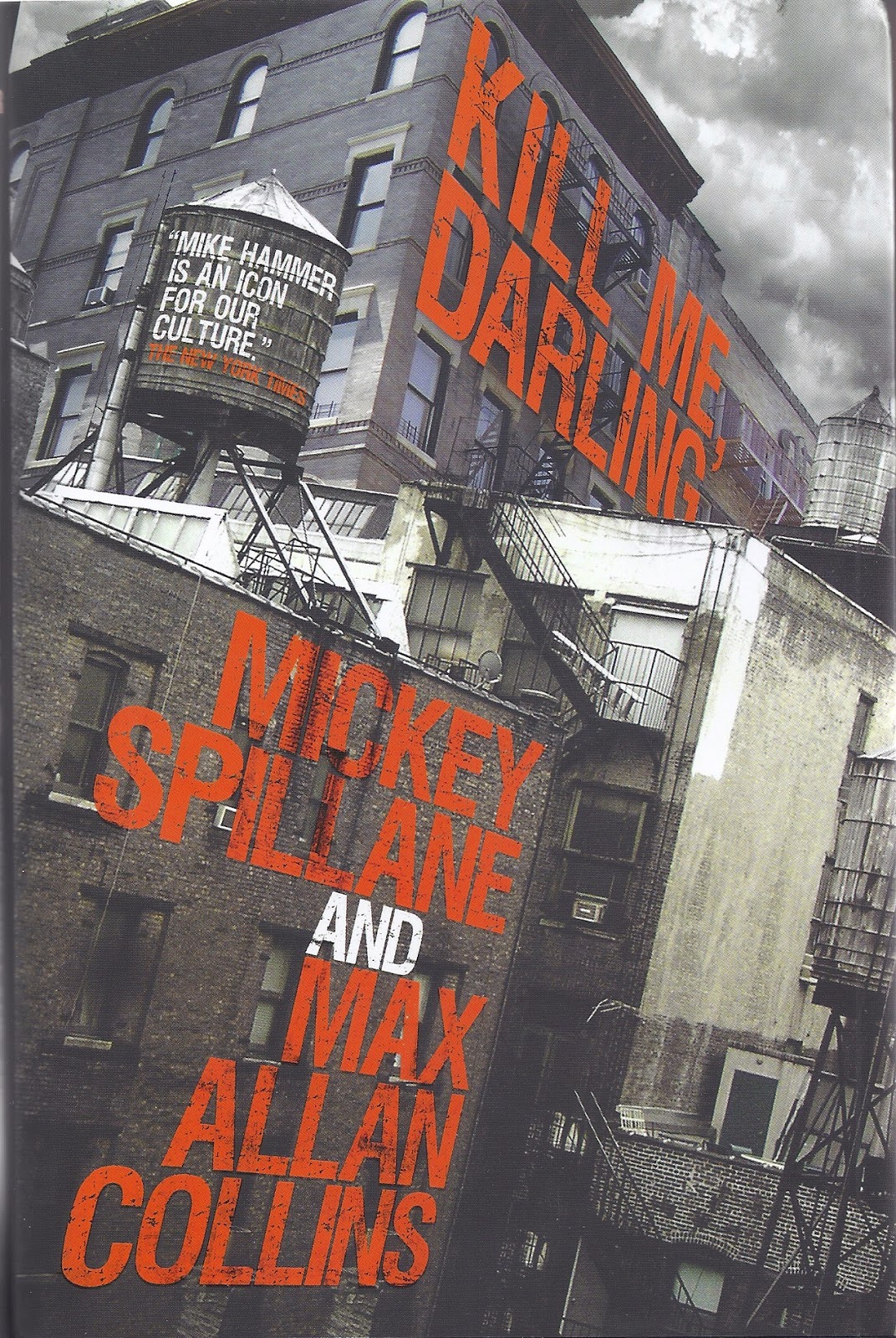 Every now and then the universe offers up such an unexpected surprise, we are left with such a euphoric rush as to describe the feelings as miraculous.  That was our experience just a few short weeks ago when the mail delivered this lost Mike Hammer thriller into our hands.  As most mystery enthusiasts are already well aware, for the past few years Mickey Spillane’s pal and protégé, writer Max Allan Collins, has done a wonderful job of completing those unfinished Mike Hammer books Spillane had left behind from bits and pieces found in the late writer’s files.

In his introduction to this particular novel, Collins reiterates that mission and goes on to explain how he, his wife Barbara, and Spillane’s widow, Jane, conducted an exhaustive search which led to discovery of as yet more Hammer material.  From these lost treasures, Collins plans to fashion three additional Mike Hammer novels, “Kill Me, Darling,” being the first.  And what a way to start!

It’s the 1950s and private eye, Mike Hammer, is sinking in an alcoholic stupor.  All because the one and only true life of his life, Velda, has left him.  Without a single word or hint of her intentions, she simply leaves a short note and vanishes.  Confused, bitter and decidedly angry, Hammer takes to the bottle to drown the pain of loss.  Then he learns that his one time mentor, Wade Manley, a veteran police officer, was gunned down in a seedy part of town and the papers are calling it a random shooting.  But even in a drunken haze, Hammer can’t buy the scenario.  Manley was an experienced cop who never let his guard down, especially to any nervous street punk.  He suspects there’s a whole lot more to the shooting.

His suspicions are quickly solidified by his friend, Detective Pat Chambers, who also has some information on Velda’s whereabouts.  Chambers has learned through police grapevine that the beautiful brunette is in Miami and supposedly involved with an up-and-coming mobster named Nolly Quinn.  Quinn has the reputation of being a ladies’ man with a sadistic streak.  Several of his past paramours have disappeared without a trace.  Chambers also suggest a connection between Manley’s death and Velda’s abrupt change of scenery.  Velda had once worked for the seasoned copper as part of his vice squad and there’s a chance Manley may have recruited her to go to Miami and infiltrate the deadly Romeo’s organization.  Word on the street is Quinn wants to bring in drugs through Cuba and setting up a base of operation in Magic City is the logical step in that progression.

Without any further ado, Hammer packs up his meager belongings, jumps in his car and heads south.  Once in Miami, he sets about finding both Velda and her new beau but as always happens with Hammer, violence and death have accompanied on his trip.  The welcome mat is bloody from day one and unless Hammer can sober up fast, his vacation in the sun may be a permanent one.

Spillane & Collins’ Mike Hammer stories are as fast paced as a hot Tommy Gun spitting lead and they never miss their target; that of thrills, suspense and mystery.  They’ve been imitated time and time again, but nothing ever comes close.  The Hammer novels are classics and “Kill Me, Darling,” proves to be no exception. 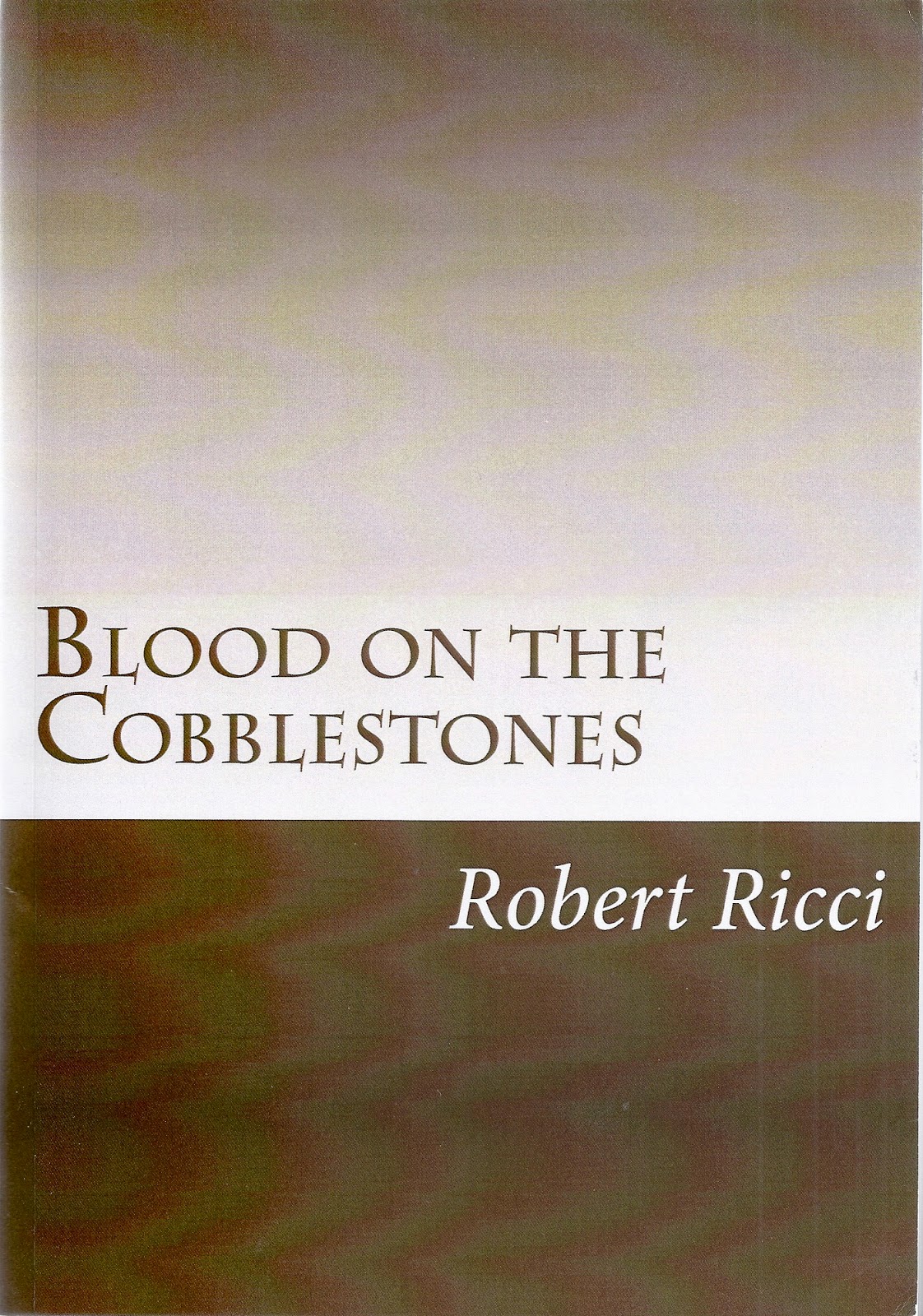 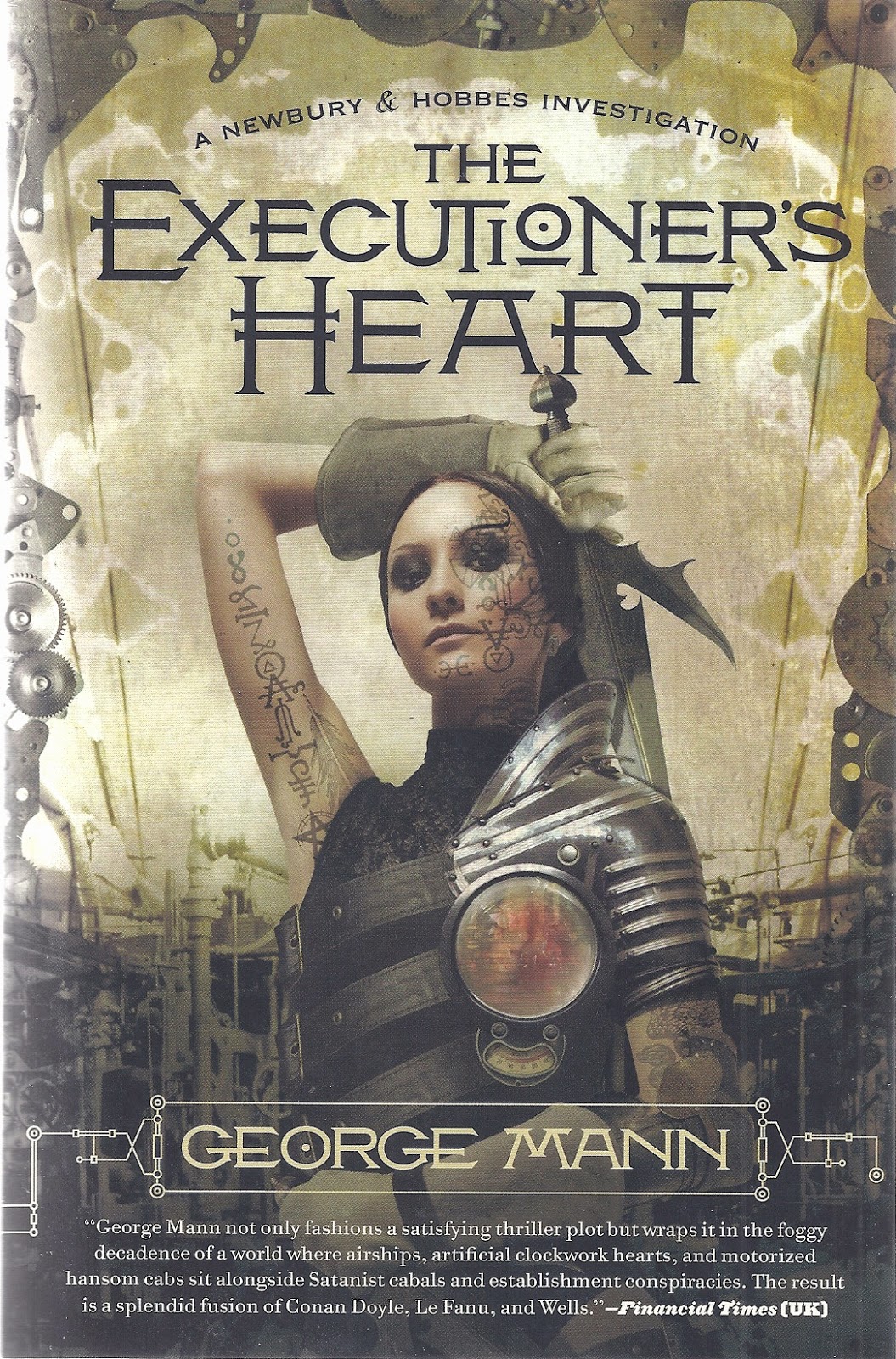 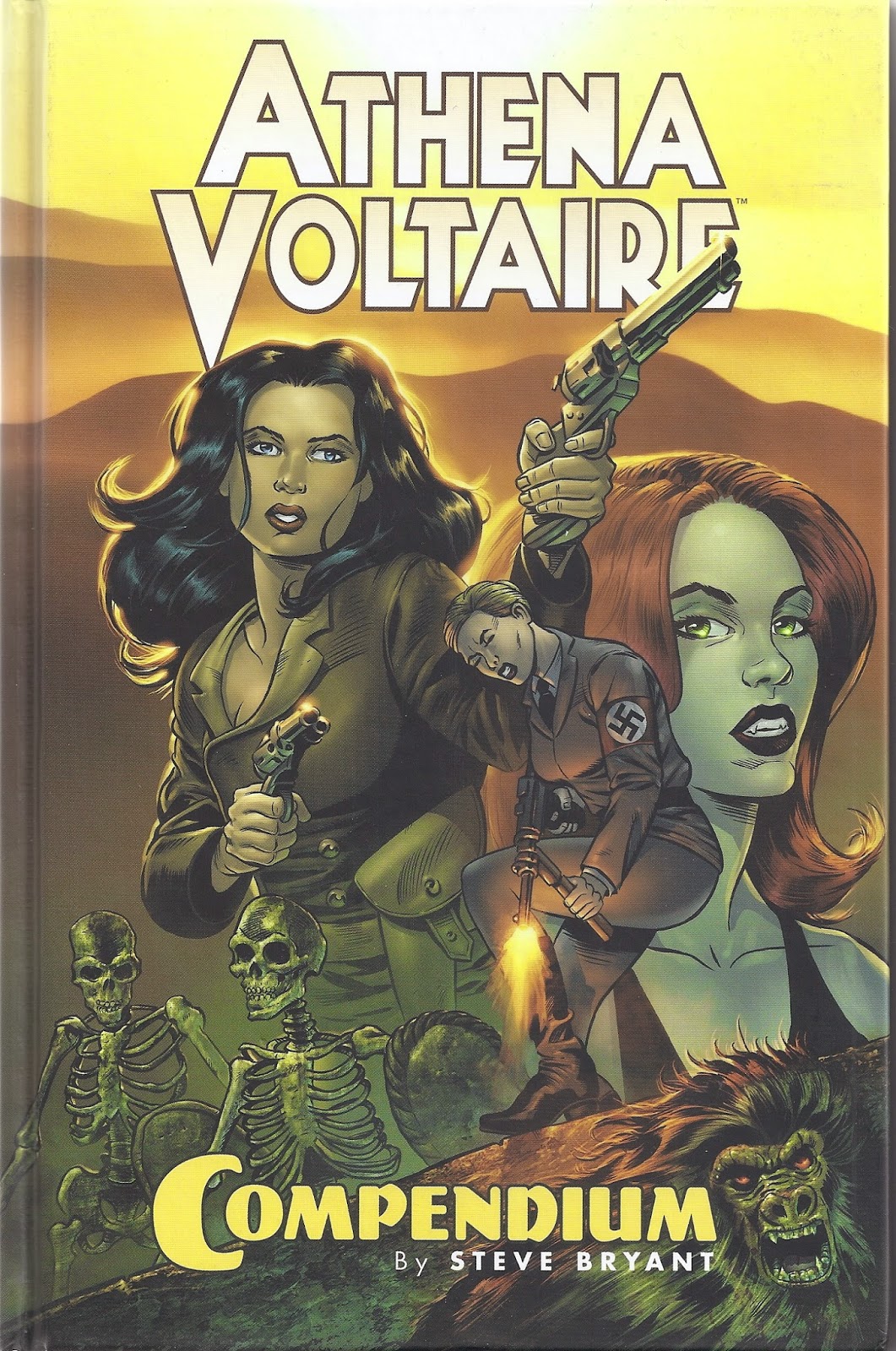