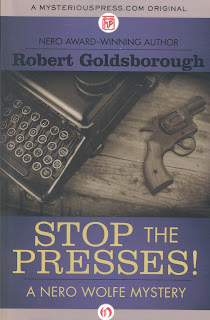 Cameron Clay is an egotistical little man who, in his selfishness, envies the rich and the powerful. But he does have one unique talent, he’s a gifted journalist and has utilized his skills to become the most widely read columnist in New York City. His daily column, “Stop the Presses,” is a glorified gossip feature he uses to attack corrupt politicians, crooked cops and even his own ex-wife for having had the temerity to leave him. Clay sees himself as the champion of the average man who must labor for the pleasure of the social elite. Thus is verbal attacks are constant and brutal. In short he is a fellow many would like to see dead.

Which is where Nero Wolfe and Archie Goodwin enter the story. Len Cohen, the newspaper writer and friend of the pair, goes out on a limb and implores Wolf to grant Clay an audience. The irascible columnist has been receiving threatening phone calls that have him convinced he is the target of a would be killer. Against his better judgment, Wolfe acquiesces to Cohen and allows Clay to visit his brownstone office and put forth his case.

The meeting between the two is one for the records as Wolfe, by some herculean task, endures Clay’s ramblings and from them gleans that nervous journalist suspects one of five people as the unknown caller. Wolfe begrudgingly tells Clay to either go to the police or hire a bodyguard. Both options are refused and Clay exits in a huff. Several days later he is found in his home with a bullet hole in his head. After a search of the premises, Inspector Cramer of the NYP calls the death a suicide, though no note is found at the scene.

Reading the account in the papers, Wolfe and Archie see it as a conclusion to the entire sordid affair.  Alas they are proven wrong. The publisher of the newspaper Clay worked for is convinced his popular staffer was murdered and hires Nero Wolfe to investigate. In his typical, methodical fashion, the heavy set, beer-drinking detective sets out to investigate each of the five people the dead man had claimed to be capable of murder.

Once again Robert Goldsborough delivers another fine Nero Wolfe puzzle and throughout plays fair with the readers. As the suspects appear and tell their stories, clues are dropped and the challenge as always is to solve the crime before Wolfe does at the traditional office gathering in the finale. Goldsborough ability to capture Archie’s voice is brilliant and each of his books would have made creator Rex Stout smile. This one sure had that effect on this reviewer. 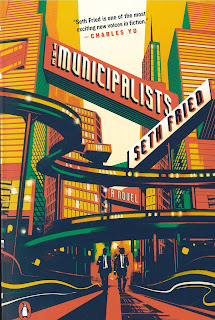 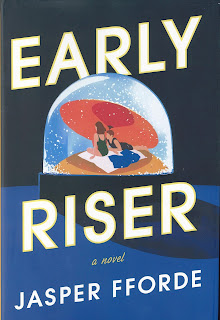