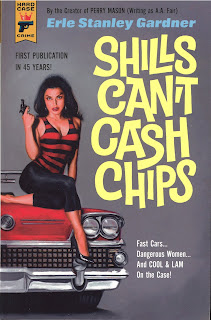 Best known for his Perry Mason mysteries, Erle Stanley Gardner seems to have had a great deal of fun creating and writing the exploits  Bertha Cool and Donald Lam. Cool, a heavy set woman, opened her agency after the death of her husband, Henry, in 1936. Shortly thereafter she hired Donald Lam, a former lawyer who lost his license to practice.

The two are as unlikely a pair of heroes as one is likely to find anywhere in mystery fiction. Described as having white hair, with “greedy piggish eyes” and weighing anywhere from 165 to 220 pounds, Mrs. Cool wasn’t about to win any beauty contests. Still her grit and determination to make a go of the agency is what makes her amusingly endearing. That her loyalty to the mousey Lam. He is anything but the iconic tough guy private eye, weighing in at a diminutive 130 lbs, and standing all of 5’6” tall. A fast-talking, ex-shyster who is constantly being trashed by bigger men and yet is somehow endearing to the fairer sex.

“Shills Can’t Cash Chips” is the 22nd of 30 Cool and Lam mysteries and its typical of most of them. Looking to find what she considers an easy case, Bertha is delighted to take on an insurance adjustment claim regarding a simple fender-bender. A successful real estate developer driving a big Buick rear-ends a small sports car driven by a young lady. She has filed a claim and the insurance company wants to settle post-haste.

Cool’s instructions to Lam, question the participants, write a detailed report for their client and collect their paycheck. Alas, as ever, Lam finds himself caught up with weird acting characters to include a burly tough guy wanting to hire him to be a bogus witness to the accident. As if that wasn’t weird enough, someone has put an ad in the local papers saying they will pay $200 to any legitimate witness who will come forth. It gets curiouser and curiouser until the developer is found dead in the trunk of Lam’s car. And just like that the jittery little detective becomes the police’s main suspect.

“Shills Can’t Cash Chips” is Gardner at his hilarious best, obviously relishing ever twist and turn and poking fun at the whole ambulance chaser cartel. We swear, Lam must repeat his account of the accident at least a dozen times before the finale. Enough so to having laughing aloud and yelling, “Please, stop!” If you’ve never read a Cool & Lam story, do yourselves a favor and pick this up. Everyone needs a good laugh now and then.