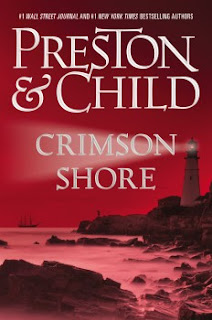 When several people are slain and their corpses found tattooed with arcane symbols, panic begins to grip the small, close knit community and our heroes are quickly caught up in a suspenseful chase that will lead them into shadowy horrors beyond anything they have ever faced before.  “Crimson Shore” is a roller-coast page-turner that will keep even the most jaded reader up till the wee hours of the night.  Its final mystery is one we never saw coming and one we will never forget.  Kudos to Preston and Child for this masterful series that shows no signs of plot fatigue yet.  And in this day and age, that’s saying quite a lot.
Posted by Ron Fortier at 9:05 AM 0 comments

A CONGRESSION OF PALLBEARERS 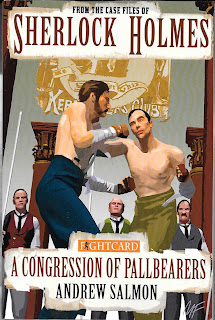 This is the final entry in the Fight Card Sherlock Holmes trilogy as written by Canadian pulpster, Andrew Salmon.  No stranger to Holmes and Watson, Salmon’s stories of the Great Detective have earned him awards and well deserved recognition. Thus it was not a fluke when Fight Card publisher, Paul Bishop, first approached him a few years ago to bring the Baker Street Detective into the world of boxing.

Salmons first two books, “Work Capitol” and “Blood to the Bone,” were well received by Holmes fans around the world.  So meticulous is Salmon’s research and his ability to turn a Victorian phrase, his stories flow with a perfect Arthur Conan Doyle pitch that is so familiar to readers.  And now we have the third and final chapter of this stellar trilogy.

“A Congression of Pallbearers,” picks up a few years after the events in the second adventure.  It begins with an assassination attempt on Holmes and then the plot meanders into a convoluted espionage affair which reintroduces the alluring character of female pugilist Eby Stokes.  Upon the culmination of their first encounter in the previous book, Miss Stokes had been recruited by Holmes’ brother, Mycroft, to be an operative for Britain’s Special Branch.  What with the world racing towards a new century filled with all manner of scientific marvels, the Empire’s role seems to be diminishing and she appears more vulnerable than ever.

Soon after the attempt on Holmes’ life, a female agent is brutally murdered and Holmes begins to suspect both incidents are connected.  He and Watson confront Mycroft only to learn Stokes, and her partner, a male agent named Andrew Martin, have gone missing while on assignment in Berlin.  Days later, Miss Stokes suddenly appears at Holmes’ door with a dangerous tale of her own.  She and Martin, while in Germany, discovered that Special Branch had been infiltrated by foreign agents who were systematically obtaining sensitive British secrets and smuggling them out of the country.  Not knowing who they could trust, the pair returned to England via a clandestine route and were now hiding in fear of their lives.

As is typical of all Salmon fiction, the plot bolts forth like a rocket propelling the narrative along at breakneck speed, all the way delving into the personalities of the players with a deft, often heart-warming perspective.  His ability to bring Holmes and Watson to life while at the same time lavishing us with local color, history and action galore is at its zenith in this offering.  In the end, he has saved the best for last, “Fight Card – Sherlock Holmes – A Congression of Pallbearers,” is an amazing work by a master storyteller.  Not to be missed. 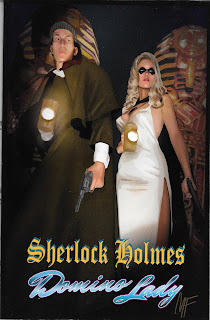 Normally we don’t care for “hybrid” publications.  By that we refer to books that have comics strips and prose stories mixed together between two covers; neither a full out graphic novel or a traditional prose anthology.  And yet, as the old saying wisely dictates, for every rule there is always an exception.  “Sherlock Holmes – Domino Lady” from Moonstone Press is that oh so rare, wonderful exception.

Edited by Joe Gentile, it reprints an earlier two-issue Domino Lady adventure by Nancy Holder and Bobby Nash, only now it is in full color, as are the other two short strips in this package. That in itself is a welcome upgrade to what was already a marvelous story.  Next we have two short prose pieces, one by Nash and the other by Holder.  Spaced between these is a solo Holmes strip Gentile and then the book wraps up with a solo Domino Lady strip by James Chambers and artist Scott P. “Doc” Vaughn.  If you are unfamiliar with Vaughn, he does a great pulp sci-fi webstrip called “Warbirds of Mars” and is no slouch when it comes to drawing sexy 1940s style pin-up beauties.  Thus his doing Domino Lady was an editorial stroke of genius.

Cap it all off with a gorgeous cover by the amazing Mike Fyles and you have a truly unique, fun and beautiful book any pulp fan would love to have in his or her collection.  As for the book’s overall theme, the pairing of a 70 year old Holmes and the vivacious, alluring Ellen Patrick from Los Angeles…well, honestly, it works a whole lot better than one could possibly imagine.  A tip of the pulp fedora to Moonstone Press.  Here’s wishing for more such hybrids.  You may make a believer out of us yet. 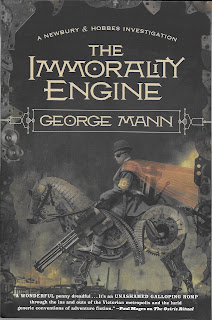