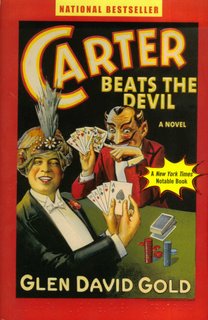 One of the joys of the new internet era is on-line booksellers like Amazon and the fact that a book that is six years old can still be available for purchase. All too often life flies by and we don’t have to opportunity to read as much as we would like to. That’s where the on-line wish list comes to the rescue.

I vaguely recall, way back in 2001 reading a review of this book and thinking it was something I might one day like to read. Then I forgot about it. A few years go by and through some quirk, I stumbled upon its listing at Amazon. Remembering the review, I put the book on my wish list and once again forgot it. Shame on me.

Last year two highly successful movies were made about magicians; THE ILLUSIONIST and THE PRESTIGE. Both were set at the turn of the century, the first in and the other in . Having seen and enjoyed both of them, I was spurred to at long last order CARTER BEATS THE DEVIL and it arrived in mail shortly after the new year. Now, having completed it, I could kick myself for having waited so long to devour this absolutely fascinating and thoroughly enjoyable tale of Carter the Great!

Charles Carter is a native of in the early 1900s and a very popular and successful magician. He is also a widower who lives a life of seclusion, devoting all of his energy to his magic career. When the President of the , Warren G. Harding, dies in a hotel, only hours after appearing on stage with Carter, a dedicated Secret Service Agent named becomes convinced the magician is somehow responsible for the President’s demise.

What follows next is an exhilarating chase that weaves its way through the factual events of the time. Not only is Carter forced to evade the machinations of a very deadly and powerful government cadre that seeks to silence him permanently, he also becomes involved with a young genius inventor named Philo Farnsworth and his amazing discovery called Television. Escaping several death traps, while staying one step ahead of the tenacious Agent Griffin, Carter also manages to find a new love in a mysterious blind woman who somehow knows more about his past than is possible by normal means.

The characters are marvelous, original and completely mesmerizing. The history is both real and fanciful with an adventurous balance that allows to reader to get lost in a magical what-if scenario that paints a glorious picture of a newly emerging technical society. It is as she is about to embrace the wonders of the new and exciting 20th Century.

After finishing CARTER BEATS THE DEVIL, I was saddened that this was not the magic book filmed, rather THE ILLUSIONIST & THE PRESTIGE. It is by far the better story. I waited six years to read this book. Don’t make my mistake and wait another six minutes. It is that good!! 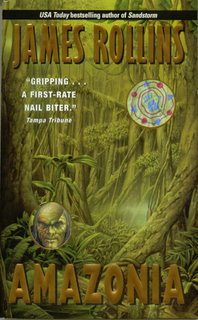 One of the most endearing allures of the adventure pulps was their exotic locations. Having been written in the midst of the 1930s, there were still many mysterious places remaining on the globe in those days, the use of such locales was perfect for firing the imaginations of the readers. In the intervening years, mankind, and its ever intrusive machines, spy satellites, etc.etc. has poked its nose in every dark and deep shadow of the world and thus filled in most the blank spots marked uncharted.

That there still remains a few isolated pockets of terra firma where man has never trod, at least civilized man, gives the impetus and weight to this new thriller by James Rollins.

It is set in the middle of one the world’s last, honest-to-goodness, unexplored jungles; the Brazilian Amazon. Much like Michael Crichton’s , it is this savage wilderness that pulls us in to the mystery of the unknown. Whereas King Solomon’s fable gold mines were the supposed secret treasure in that earlier work, here Rollins invents a lost tribe of natives who supposedly possess supernatural abilities. One of these being the ability to regenerate missing limbs.

Nathan Rand’s father disappeared on an expedition to find this lost tribe. Now, four years later, a member of that doomed party, who had only one arm, emerges from the jungle, dying, but with two arms. Very soon both American and foreign pharmaceutical companies begin making plans to re-enter that green, deadly world in hopes of discovering the ultimate fate of the lost expedition. They also seek to find the miraculous restorative secrets of the jungle people. Medicines that can regrow limbs would make drug companies ten times richer then they already are.

is asked to join the American team, led by a brother and sister team working for the C.I.A. and the American Health Institute. With them are representatives of the same drug company that employed his father, and a contingent of highly trained Army Rangers to help protect the group against the many dangers ahead. Of course any experienced reader, upon meeting this large cast is all too aware that most of these characters will serve only as fodder for the writer’s, and jungle’s, unique and imaginative death traps. And do they ever appear fast and furious. From giant river caimans, South American crocodiles, to a more bizarre swarm of deadly locusts. There are mutated piranhas that leap out of the water like frogs, by the hundreds, to a pack of giant black leopards with razor sharp claws that act as guards to the hidden valley where the lost tribe resides.

The guessing game inherent in any such novel is trying to figure out who will survive and who will not. The book’s finale, the revelation of the secret behind the lost valley and its wondrous healing plants is really well handled and I didn’t feel cheated at all. There’s a truly nasty, sadistic villain who has a psycho girlfriend twistedly into making shrinking heads out of the people she kills, if the rest of all this wasn’t enough to convince you, AMAZONIA is one hell of a great pulp ride. I’ll certainly be hunting up more of James Rollins work in the future.