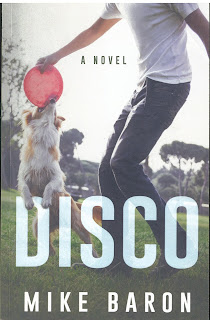 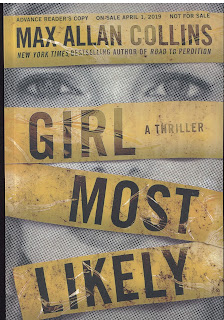 Books by one’s favorite writers are always a welcome treat for any reviewer. Whereas we’ve enjoyed Max Allan Collins work over the years, we always do our best to be honest and truthful with these reviews. Have no worries, dear readers, Collins once again delivers a resounding homerun knocking the ball way-way out of the park with “Girl Most Likely.” In it are all the elements that make up the majority of his work; suspense, likeable characters, skillful pacing and a liberal dose of humor.

Krista Larson is the police chief of the Midwest tourist town known as Galena. At twenty-eight, she also has the distinction of being the youngest chief in the country. We soon learn that she followed in her father’s footsteps. Nntil his retirement, Keith Larson, was a detective in nearby Dubuque. With the passing of his wife from cancer, Keith  accepts his daughter invention to “move back home” and so as the book begins he is awkwardly getting settled into the house where he and his late wife raised their only child.

Meanwhile, Krista is making preparations for her tenth high school reunion to be held at a nearby lodge. Like most sane people, she is ambivalent about attending and having to see people now part of her past. Oh, there are friends she hopes to reconnect with, plus those students who remained in Galena. She maintained close relationships with several of these. It’s pretty much the “out-of-towners” that she’s concerned about. One such is Astrid Lund, “the girl most likely to succeed” as labeled in the senior yearbook. She went on to become a celebrity journalist for a Chicago television station. Astrid’s appearance at the reunion has the entire community abuzz.

What they don’t know is the dark secret Ms Lund is harboring and how it is one of the primary reasons for her return. When Astrid is brutally murdered hours after the reunion dance, Krista Larson is handed her very first murder case. Even though she is confident in her own abilities and those of her small staff, she wisely recruits her father to act as an unofficial consultant on the case. With his assistance, and her own natural “cop” instincts, the two soon suspect the murderer is in fact a member of the Class of 09 and the motive lies with Astrid’s long-kept secret.

As always, Collins’ attention to details is magnificent. Although police procedure is for the most part universal, there are obvious differences in approach. A big city homicide division has a great deal more resources available to it than those of a small town police department. It is this realistic view of Krista and her team’s operations that wins our applause. The mystery unfolds at the perfect pacing and in doing so builds each layer of suspense until the reader is unable to put the book down.

Now the finale, while fitting, left us a wee bit unsatisfied. The end comes and the stage curtain drops…wham. Whereas we’d just spent a few hundred pages with Krista and her dad, an epilogue would have been welcomed here. Still, that is a minor quibble and indicative of the fact we’d very much like this to become as yet another Collins series. Please, Max, more. 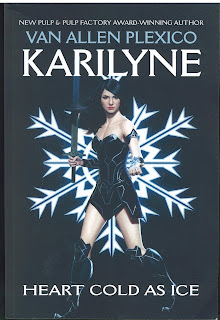 Hell hath no fury like an Ice Goddess tricked. Here’s hoping you’ll forgive my twising the Bard’s famous phrase to kick off this review of Van Allen Plexico’s latest entry in his grand space saga. Karilyne is the beautiful goddess of ice and steel who enjoys her solitude. When a fellow god, Cevelar, accompanied by a human, General Vostok, come to her for help, she unwittingly falls for their lies and soon finds herself imprisoned in a foreign castle and her mighty battle axe stolen.

Through the assistance of a strange little techno mage, Karilyne and her human aid, Mirana, escape only to learn Cevelar and Vostok are seeking six cosmic weapons of incredible power with which they hope to resurrect a dead god of chaos. Karilyne’s axe is one of the six artifacts required. But she knows their insane plan will ultimately bring about the destruction of the entire universe. They must be stopped and she will have her revenge.

Soon they are joined by two female Templar knights and a giant gray warrior, all agreeing to serve Karilyne for the duration of her mission. The group begins to travel the varied dimenions of the Three Levels upon which reside gods, humans and aliens. When Solonis, a whimsical god possessing a time traveling machine, joins them, the action kicks into high gear. Soon our heroes are flung from one reality to another. They even witness the all consuming future entropy; if Cevelar and Vostok are successful.

Once again, Plexico creates memorable characters, each distinct and original. He then drops them into wondrous settings rich with imagination.  His world building is clever and mesmerizing, pulling the reader into these myriad realms effortlessly. If you’ve read his earlier books in this saga, you already know what fun awaits you. If you are just now discovering the series, do not wait another minute before opening this book; what awaits inside will blow your mind!!
Posted by Ron Fortier at 9:23 AM 0 comments