CAVE OF THE BLOOD DEMONS 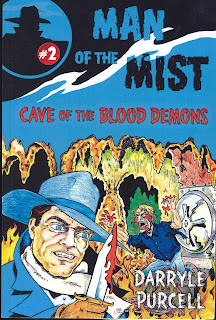 This is the second in writer Darryle Purcell’s new pulp series, featuring his Man in the Mist and the second of his books to land on my review stack. The first was part of his older series, The Hollywood Cowboy Detectives of which there are currently fifteen. The Man in the Mist is actually Los Angeles manufacturing industrialist Ralph Thorn. Trained by mystics in the Far East, Thorn can cloud the minds of men and blind them to his very presence, thus becoming an invisible avenger meting out justice to those beyond the law.

As the adventure opens, it is 1938 and a poisoned drug is turning people into mindless killers. Helping the police investigate the source of the lethal drug, Thorn and his feisty secretary sidekick, Moxie Malone, discover the tainted heroin is actually being delivered hidden in small dragon statues imported by one of his own companies from Indochina.
Determined to discover the actual source, Thorn, Moxie and Police Detective Farmisht are soon on a cruise ship bound for the Orient. With them is the lovely Cecile Nguyen, whose father runs the rubber plantation that services Thorn Industries.

But danger is also along for the ride, as agents for the mysterious mastermind, known only as the Dutchman, launch several attacks on Thorn and his companions. The action never stops, as Purcell captures the speedy pace of the classic pulps while adding a healthy dose of comedic banter to ease the suspense along the way to his action packed finale.  “Cave of the Blood Demons” is one hundred percent pure pulp fun and shouldn’t be missed.
Posted by Ron Fortier at 10:37 AM 2 comments 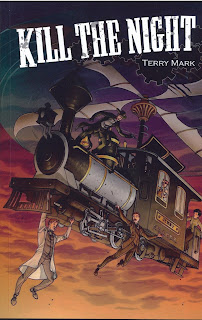 Writing a first book is always a tricky challenge. All too often most would-be authors spend months, even years, on a project only to end up with pages of uninspired words.
It is all too rare when a new writer puts in lots of blood, sweat and tears to deliver something truly original and fun. The latter is the case with Terry Mark’s first effort, “Kill The Night.” This is an out and out pulp thriller that moves like a runaway freight train.

The story begins in Paris where inventor Nikolas Tesla has debut his newest wonder, a giant robot that can lift and move heavy transportation barges on the Seine River. When a later demonstration goes awry, a beautiful young lady is killed. Her lover, looking like American gunslinger, vows vengeance on Tesla.

The book then jumps ahead in time and space to New York where Tesla and American genius, Thomas Editor have become bitter foes over various patent litigations and broken contractual agreements. Enter a spunky female journalist named Ida Tarbell who sees the feud between these two famous men as the story of a lifetime. She follows the two men to the Chicago World Exhibition, where Tesla has agreed to light the famous “White City” with electricity.

When the Gunslinger appears, Tesla is forced to flee westward. As it turns out, the mysterious hunter as added Edison as a target and both men’s lives art in jeopardy. But who exactly is this man and what terrible dark secret does he hide. From Chicago onto Kansas City and then a wild race to the mountains of Colorado for a bang up finale.
Writer Mark Terry pulls out all the stops.

“Kill The Night,” is wonderfully set in a time when Americans saw science and progress as the twin paths to a brighter future. It was a time of wonder and awe. In this whirlwind era, three courageous people struggle not only to triumph, but to survive. This is a terrific. Sadly it is not currently available through normal distribution channels and interested readers should contact Mr. Mark directly at the address above. Tell him we sent you…with the highest recommendations.