THE COWBOY AND THE CONQUEROR 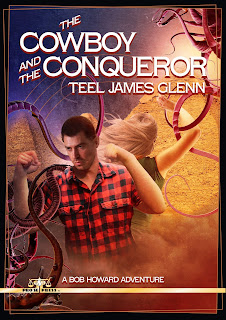 THE COWBOY AND THE CONQUEROR

In 2020, writer Teel James Glenn wrote “A Cowboy in Carpathia” and in 2021 it won the Pulp Factory Award for Best Novel. The conceit of the story was that pulp writer Robert E. Howard, the creator of Conan, and other great characters, did not commit suicide and in this alternate world went on to have real adventures. In one such he took and defeated the Vampire King, Dracula. Talk about a great pulp concept. It was no surprise to this reviewer that it went on to win the Best Novel title.

And so here we go again, back to this “what if” world and this time the battler from Cross Plains teams up with another pulp writer. This one is German and his name is Adolf Hister. Whoa. Up reading the opening chapter, this reviewer sat back and wondered if our eyes had deceived us. Was the first person narrator of this sequel actually an alternate world version of Adolf Hitler? Answer, yes, he was. Only this little fellow with the Charlie Chaplain mustache is married and has two sons. His life has been blessed and he is a successful spinner of tall tales. Wow. You have to give Glenn kudos for have the courage to pull this switch.

Howard and Hister meet on a boat in Egypt traveling the Nile. Their ship is boarded by Arab revolutionists who kidnap a British headmistress and her girls on a field trip. Our two pulp scribes give chase, assuming the girls are going to be held for ransom by the bandits. Little do they know that behind the raid, is a mysterious cult known as the White Hand and their objection is a great deal more sinister. When this comes to light, the Cowboy and German wordsmith return to London where they will uncover the White Hand’s master plot, the true leader.

In Glenn’s topsy-turvy upside world, our good guys are villains and vice versa. As if that wasn’t enough plot for this non-stop action adventure romp, he even gives us a very unhealthy dose of H.P. Lovecraft’s Cluthu mythos. Oh, yeah.

“The Cowboy and the Conqueror” may be Glenn’s most accomplished work to date. He cleverly sets the table with all kinds of familiar pulp tropes and then peels back a philosophical layer that at the core of all stories. The myths behind life and death and the choices we make. What else can we say but…bravo!!!  Clean a space off your trophy self, Mr. Glenn.

BLOOD ON THE TRAIL 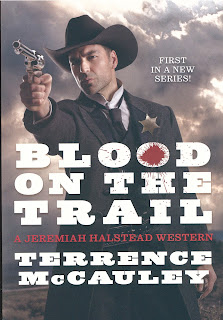 OD ON THE TRAIL

Mystery writer Terrence McCauley burst on the western scene several years ago with his first Sheriff Aaron Mackey novel, “Where the Bullets Fly.” At the end of that four book series, Mackey was sworn in as Montana’s U.S Marshal and residing in Helena, the state capital. We cannot say enough good things about that series and happily reviewed each and every one of them. Though we were led to believe that after the fourth book that would be the last we’d see of Mackey and his likeable cast of characters.

Happily we’ve been proven wrong as McCauley has now returned to Montana and begun a second series this time featuring one of Mackey’s Deputy Marshals, Jeremiah Halstead, who had first appeared in the previous books as a supporting character. Young Halstead was the son of one of Mackey’s closest friends from the war. In this first story, Deputy Halstead is sent down to the small town of Rock Creek to locate the whereabouts of the murderous Hudson Gang. That he manages to do easily enough. It is only after he captures the gang’s leader, John Hudson, that his trouble begins. Fleeing Rock Creek with the rest of the killers chasing him, Halstead manages to escape but not before killing two of them; one being Hudson’ younger brother.

Desperate to get back to Helena with his prisoner, the Deputy Marshal stops in the town of Silver Cloud, a half-way point on his trip. But when goes to the local jail to lock up his prisoner, he’s confronted by the mean-spirited Sheriff Boddington and his two dimwit deputies. Halstead has no patience for men like these and quickly puts all three out of commission with the use of his rifle butt; an action guaranteed not to endear him with the good people of Silver Cloud. Then he gets a telegram from Marshal Mackey telling not to return immediately, but to remain in the burgeoning mining campe, Halstead’s situation becomes less than enviable.

Then within twenty-hours of his arrival, a popular prostitute is murdered, her body discovered in the alley behind the saloon. Thus our hero is forced to stay in a town where he has already antognized the sheriff, is embroiled in a murder investigation and very much aware that the remainder of the Hudson gang is most likely to attempt to free their boss at any time. Suspense builds upon suspense as McCauley skillfully weaves his narrative at a remarkably well established pace. There is plenty of action throughout the tale skillfully interwoven with genuine characterizations of believeable people. As a series debut, “Blood On The Trail,” is a magnificent launching which only has us hoping the sequel isn’t too far off. This is what good westerns are all about. Young Vernon Jiles was bullied as a child. His worst tormentor, his older brother. To survive these daily beating, Vernon lost himself in his comics and soon developed a true love of graphic storytelling. Enough so that he began drawing his own comics and grew up to become a professional illustrator.  But there was more to Vernon’s story for he possessed a very unique imagination, one his mind learned to harness is a most spectacular way. Vernon discovered early in his comic creating career that he, by the power of his mind, could bring his cartoon characters to life.

Soon, his colorful friends, led by the fighting DuckTard, were parading around his studio and adding to the fun and mayhem of his daily life. Ultimately, realizing he had the ability to do good and protect people, Vernon assumed a secret identity and the Vermin, scourge of the underworld, was born. Again, all because of his amazing imagination.

When the beautiful Tenacity Mills answered an ad to be his assistant, she was instantly brought into his top secret crusade. At first the poor girl thought she was losing her mind, but gradually Vernon’s naïve sincerity won her over. Soon Tenacity was fighting crooks and communist agitators alongside Vermin and his cartoon posse.

Darryle Purcell is a gifted storyteller unafraid of exploring the wild and bizarre and he has no problems making the impossible seem totally believable. Never more so than in this crazy romp with two of his most likeable characters ever. In fact when you consider the plot, this reviewer doesn’t wonder if some of these exploits weren’t based on his own life. Now that would be crazy! And fun!