CAPTAIN MOXLEY and the Embers of Empire 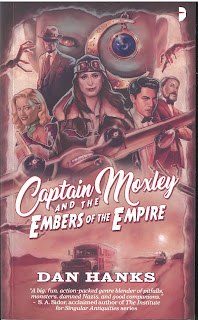 CAPTAIN MOXLEY and the Embers of the Empire

One look at artist Daniel Strange’s collage cover and you would expect to read a rollicking, over the top action packed pulp adventure. Sadly, often times as the old saw tells us, you can’t judge a book by its cover. In this rare and wonderful instance, you most bloody well can. “Captain Moxley and the Embers of Empire” is pretty much everything a good solid new pulp tale should be. It has a great protagonist, wonderful supporting cast and some truly weird and deadly villains. And it all takes place on an alternate earth not our own.

Wow, that’s a lot of good stuff. Indeed it is, and Hanks pulls it off beautifully. In this “other” earth, World War II has ended and former British fighter pilot, Samantha (Sam to family and friends) is in New York City to find her sister Jess who she believes has been kidnapped by a secret cabal known as the Nine. She was once one of their agents, but soon realized they were corrupt and left their ranks. Something they frown upon very badly.

As it turns out, Sam finds her sister busy at work on a new exhibition at the Natural Museum of Science in Manhattan. Jess is an archeologist, and along with her colleague and boyfriend, Will, is about to put on display and ancient artifact the Nine want. Sam arrives in the nick of time, fouls the attempted kidnapping/robbery and then is off to Paris, along with Jess and Will, to contact Professor Edward “Teddy” Ascher, a former flying pal of French/Arab descent and leading expert on the Hall of Records, a supposed lost despository of the world’s accumulated knowledge hidden beneath the sands of Egypt.

It is Sam’s belief that the Nine’s primary goal is to find the hidden library because among its many wonders is a power source of unbelievable strength which would allow them to become masters of the world. Teddy proceeds to tell her aside from the amulet Jess has in her possession, there remains one other artifact, a key, supposedly hidden in the catacombs beneath Paris. Without it, the amulet is useless. Needless to say, Sam and her team of three soon find themselves racing against their enemies under the city streets to find that lost key.

If all this echoes the Indiana Jones movies, it is because Dan Hanks blatantly list those films and many others, including pulps and comics, as his inspirations for writing this bold, in your face adventure. It is a fast paced page turner with so much action as to leave the reader for breath by its climatic finale. Oh, and as if that wasn’t enough to satiate your need for pulp thrills, the ending fades out with the obvious intent of a sequel. One we cannot wait to get our hands on. “Captain Moxley and the Embers of Empire” is a hoot, pulp fans. We found it at Amazon. You should pick it up now. Don’t wait another minute.