MEN'S ADVENTURE Quarterly Vol One No. 1 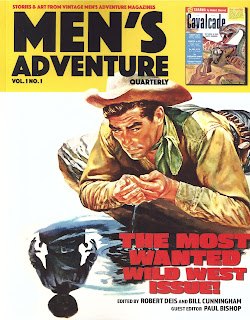 Team-ups; there’s nothing better. Being an avid comic fan we early on learned how amazing things can happen when two creators join forces. The prime example being writer Stan Lee’s partnership with artist Jack Kirby. Alone, each was a master of his craft; together they were unbelievable. Arguably there would have been no Marvel without either one.

Pulp editors were all too familiar with this concept as they constantly strove to pair their stories with the right cover painters the goal of making their monthlies stand out. Some succeeded admirably while others failed miserably. The paperback publishers of the 60s and 70s also understood the value of such pairings. Sticking the Robert E. Howard Conan stories behind a Frank Frezetta painting was genius and introduced an entire new generation to Howard’s fiction. The same can be said for James Bama interpretation of the Man of Bronze on the Bantam Doc Savage paperback reprints. Art and literature merging into one seamless product to capture the imagination of the readers.

Which brings us to the grand team-up responsible for “Men Adventure Quarterly.” Bill Cunningham, with his background in comics and science fiction, is a brilliant book designer. His sense of composition and use of reproduced art is masterful as is evident on every single page of this colorful periodical. Then we have Robert Deis providing him with the content he is an expert of; the art and stories of the MAMS (Men’s Adventure Magazines). In the past few years, Deis, with the aid of publisher Wyatt Doyle, has re-energized the scholarly interest in those garish “sweat” mags and in doing so proven their legitimate claim as the heirs to the classic pulps of the 30s and 40s.

With this beautiful 156 pg treasure, Deis and Cunningham have given us a magnificent sampling of what MAMS were about. From the reproductions of glorious covers and interior illustrations to the reprinting of both factual articles and action packed fiction, this collection is rollicking trip back in time. We could rant all day about the nine gun-blazing stories included here. But it was the article on actor James Arness and his role as Matt Dillon in the TV series “Gunsmoke” that was an amusing surprise. Written when the show was only a few years old, the big guy has no clue whether his show was going to be a success or not. He talks about what he will do when it is taken off the air. He had no inkling of the ground breaking longevity this cowboy series would ultimately achieve.

Then we have a pin-up feature with the beautiful model Juli Redig and a gallery of artist Robert Emil Schulz MAMS western covers. The concept is every single issue will focus on a specific genre and western’s was a good choice to kick things off. We’re told the next issue will deal with spies. If it and subsequent volumes maintain the level of quality achieved with this premier issue, we pulp/MAMS fans are in for some really great reading. Thanks Mr. Cunningham and Mr. Deis, we owe you both big time.