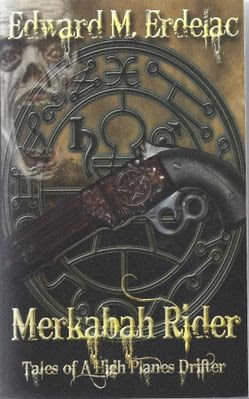 MERKABAH RIDER
By Edward M. Erdelac
Damnation Books LLC
278 pages
Although the straight forward, no frills western genre seems to exist only in today’s paperback market, the proliferation of the “weird” western tableau is visible everywhere.  Comics and prose anthologies have been expanding this pulp theme strongly and recently Hollywood has joined in with films such as “Jonah Hex”  (a cowboy who can speak to the dead), “The Warrior’s Way” (pitting Japanese Ninja’s against cowboys) and the soon to be released blockbuster, “Cowboys VS Aliens,” (the name says it all).
Up until a few weeks ago, I’d pretty much thought there was nothing else to be done with bizarre westerns.  Happily Edward Erdelac has proven me wrong with his “Merkabah Rider – Tales of a High Planes Drifter.”  The giveaway is in the spelling of the word planes.  For you see, the hero of this book is a Hasidic Jew mystic known as a Merkabah Rider because of his ability to travel out of his body and explore the higher and lower realms of heaven and hell.  In fact the Rider, as he prefers to be called, actually travels the post Civil War southwest on foot, pulling a dirty white onager behind.  An onager is an Asiatic wild ass.  I had to look that up too.
Through the four stories in this volume, we learn that the San Francisco born Rider interrupted his religious studies to serve in the Union Army during the war between the states; a decision that turned many of the elders of his order against him.  He returns home to discover all the members of this enclave, known as the Sons of Essenes, have been murdered by his renegade teacher, a man known only as Adon.  Feeling spiritually tarnished by his association with Adon, the Rider begins his quest to seek him out and exact vengeance.  In the process he travels the globe until his quest brings him full circle back to American desert lands of the southwest.
Which is where this first book begins. In the quartet of adventures collected here, the Rider battles a foul Demon sacrificing children in an Arizona mining town, combats a dust devil that animates a hellish windmill in a Mexican border town, goes up against a cursed gunman who slaughters entire towns and confronts a powerful, alluring succubus said to be the first wife of Adam.  Through these travails, the Rider learns that Adon is conspiring with the demon world to bring about an earthly holocaust which will herald the end of all mankind.  Unless he, alone, can stop him.
“Merkabah Rider,” is a terrific read that captivated me from the first page to the last.  The exhilaration of discovering something new and vibrant in an old setting provided this reviewer with complete and unabashed entertainment.  The Rider is the most original western hero since Clint Eastwood’s Man-With-No-Name and his background in the exotic magic of ancient Hebraic mysticism make him a character this reader will not forget any time soon.
Posted by Ron Fortier at 1:20 PM 0 comments 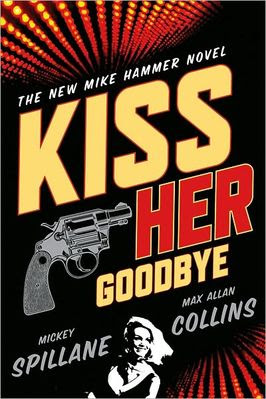 KISS HER GOODBYE
By Mickey Spillane & Max Allan Collins
Houghton Mifflin Harcourt
270 pages
Available 25 May 2011
This book, the third Mike Hammer thriller begun by the late Spillane and completed by his protégé Collins, takes place in the mid 1970s.  Hammer is in sunny Florida recuperating from several bullet wounds; the results of a shoot-out on the New York City docks with the crazy son of a mob boss.  Emotionally wounded as well as physically, Hammer has fled the Big Bad Apple, deserting his friends and most importantly the one truly love of his life, Velda.  He is determined to spend the rest of his days basking in the sun and deep sea fishing.  But when his pal, Detective Pat Chambers calls with the news that his old mentor, Inspector Doolan is dead, an apparent suicide, Hammer has no choice but to pack it up and return to the asphalt jungle.
So begins one of the most convoluted mysteries the tough-as-nails Hammer has ever confronted.  Doolan had been diagnosed with cancer and his days were numbered.  Everyone, including the coroner, is convinced he shot himself in the heart before the end became too painful to endure.  Hammer doesn’t buy it, even though the evidence is stacked against him.  It doesn’t feel right.  His love of the old war horse tells him Doolan would never have succumbed to what he always referred to as “the coward’s” way out.
No sooner does Hammer start poking around, visiting Doolan’s friends and a few of his enemies, then he and Pat stumble on the body of a young waitress stabbed to death only a few blocks from the funeral service for Doolan.  Is it random coincident; just another senseless death on the mean streets of the city?  If so, then why does the newly appointed, highly ambitious assistant district attorney show up at the crime scene?  What is her interest in a supposedly routine slaying?  With each passing hour, Hammer uncovers facts that on the surface appear totally unconnected. From a former gangland heir operating the city’s fanciest disco for the rich and famous to a legendary jewel with ties to Nazis war criminals living in South America.
Couple this with Hammer’s own confused emotions about being back in the steel canyons he both loves and hates and the stage is set for a slam-bang adventure unlike any the savvy gumshoe has ever encountered.  This book is packed with fast guns and dames and plenty of punches all culminating in a shootout that makes the Gunfight at the OK Corral look like a picnic! In a world that has become soft and compromised with the corruption of “political correctness,”  having Mike Hammer back to plow through the BS and uncover the truth, no matter the cost, is a jolt of clear headed sanity we all need lots more of.
Posted by Ron Fortier at 8:04 AM 1 comments