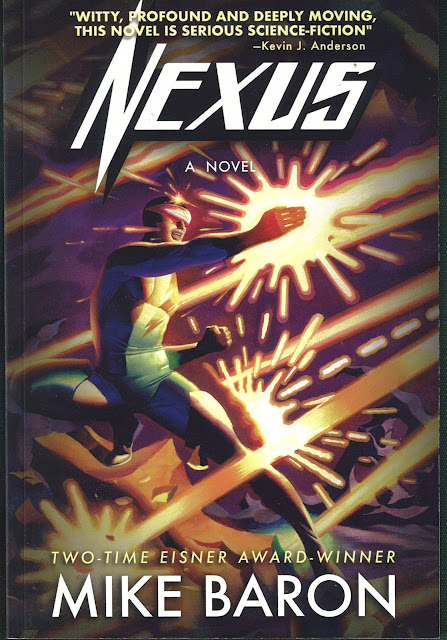 We’d guess most reading this review are well aware that Nexus was a science-fiction comic book series created by Eisner winning writer Mike Baron and illustrated by Steve Rude. Now, long after the days of First Comic and the Bronze Age of the Independents, Baron has given us a truly amazing Nexus novel that will simply blow your mind.

Baron’s prose doesn’t so describe a setting as injecting it directling into your imagination with his verbal scalpel. His prose is a joyous romp elevating the art of storytelling to a whole new level. One you shouldn’t even consider passing by.

The plot is basic good versus evil, only on a cosmic scale. Gourmando is an eater of worlds and he’s chosen the planet Ylum as his next galactic entrée. What this all powerful devourer doesn’t know is Ylum is also the home of Horatio Hellpop, the universe’s own avenging angel. Nexus will do anything within his own amazing powers to save his world and its wonderful, spirited freedom loving alien citizenry.  Even to point of sacrificing himself so that they might live.

“Nexus” does what Baron has always done in his brash, no-holds-barred career. It takes chances, it makes one laugh and cry while musing the eternal question, “Why?” Unlike Victor Hugo’s Quasimodo, we think Horation Hellpop might counter, “Why not?”