DEAD JACK and The Old Gods 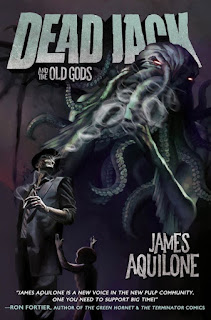 DEAD JACK and The OLD GODS

Unlike the overwhelming majority of our colleagues in the pulp community, we have never been fans of writer H.P. Lovecraft. His elaborate myth of the Cthulu and the Old Gods always seemed too grandiose a concept to be effective as good old fashion, gut wrenching horror. Gives us a creepy Edgar Alan Poe tale anytime. Obviously we are the minority and over the years have had to endure countless stories wherein various popular occult detectives battled the cosmic deities with their giant batwings and elephant snouts ad infinitum. Everyone one of those left us bored silly.

Which brings us to James Aquilone’s third Dead Jack adventure in which, you guessed it, our cynical Zombie detective and his Pillsbury Doughboy homunculus pal Oswald, must save the world of Pandemonium from the Ancient Gods. Apparently someone has gotten their hands on the dark magic tome known as the Necronomicon and is all set to open up a dimensional portal by which Cthulu and company will make their appearance. At this point we were ready to stifle a yawn. That never happened in this instance is due to Aquilone’s brilliant solution to the whole Lovecratian mythos; make it funny. Which is exactly what does work.

Amidst their quest for the book, Dead Jack and Oswald are attempting to work out some very serious relationship issues left over from their last adventure. It seems Oswald has swallowed a magical Jupiter Stone which gives him amazing powers. Though unwilling to admit it, Dead Jack is envious. Succumbing to that emotion, he begins to verbally abuse his little buddy to the point they seek out couples-therapy. Somewhere in the middle of this merging of insane plots, it suddenly dawned on us who the two of them brought to mind. Jack and Oswald are the horror/fantasy versions of the classic Hollywood comedy team of Bad Abbott and Lou Costello. It’s all there, from their sniping attitudes towards each other in the midst of danger, to the underlying true sense of friendship and loyalty.

All of which plays itself out by the book’s cataclysmic no-holds-barred battle between their unified avatar and the alien God of Doom. Honestly, Aquilone surprised us again with another entry twice as much fun as the first two. With Dead Jack, things are never dull for a second. Oh, and before we forget, the writer offers up two bonus short tales that are mini gems. The hardest part of reading a Dead Jack novel is reaching the end and having to wait for more. Now that’s cruel. 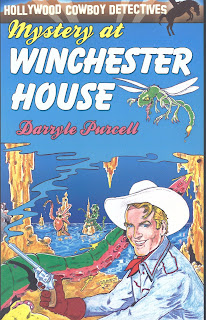 This is the twentieth offering in this fanciful series starring many of the classic movie cowboy stars of the 30s and 40s. The primary characters featured throughout most of the adventures are Sean Curly Woods, public relations flack for Republic Pictures, Nick Danby a studio chauffeur and younger brother to Excecutive Producer Rick Danby and  one-time cinema western hero, Hoot Gibson. The three often work as the studio’s trouble-shooters heading off whatever problems might arise to plague a particular production.

In this outing, the studio has rented the supposedly haunted Winchester Mansion in which to film their new Man of the Mist cliffhanger starring the once Singing Cowboy, actor Dick Foran. A few days before shooting is to begin, the Mr. Danby receives a threatening note warning of disaster should Republic go ahead with their filming at that locale. Undaunted, Danby sends his Hollywood Cowboy Detectives to oversee the production. Which is when Curly is contacted by a ghost from the future. In fact it is the ghost of Dick Foran. Considering his past experiences, Curly takes this appiration in stride though he has a bit of trouble accepting the fact that ghosts can travel through time.

Foran’s ghost not only adds his own warnings but tells Curly the recent Winchester hauntings have become infested with alien beings from another dimension. See what we mean by complicated. Curly does his best to keep his head above water, while vainly relating these facts to Nick and Hoot who are never far away from a fresh bottle of beer.

Purcell’s imagination is unique to say the least and in this caper he pulls out all the stops. He even has a lovely young Dolores Cansino show up to add some exotic loveliness to the weird goings on. Needless to say, but the time our three roustabouts get to the bottom of things, they are knee deep not only in ghosts and monsters, but also a sinister Nazis plot to employ powerful occult forces to attack America. Did we say this one has it all, including the kitchen sink?  “Mystery at Winchester House” is a madcap fun ride with a colorful cast and is chock full of non-stop action. Once again Purcell hits the bullseye square.