EPITAPH - A Novel of The O.K. Corral 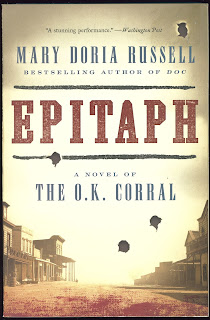 A Novel of The O.K. Corral

All nations have their cultural myths. Fantastic stories from their histories that helped define their national personas. In the Scandinavian countries it was the myths of the Norse Gods that inspired the Vikings. Great Britain was founded on the tales of King Arthur and his Knights of the Round Table whereas in America, the post Civil War era of the Wild West would forever shape our future character. And no single event from that period was more poignant in myth-making that the Gunfight at the O.K. Corral.

From books to movies, that thirty second gun battle on a dusty street in Tombstone, Arizona on Oct 26, 1881 has continued to spellbind us a hundred and forty years later. In her long and brilliantly written novel, Mary Doria Russell paints an all encompassing narrative of both the characters and the tumultuous times in which they lived. Her primary character through most of the tale isn’t either the Earps or their Cow Boy enemies, but one Josephine Sarah Marcus who would eventually become Mrs. Wyatt Earp.

Born in 1862, Josephine, called Sadie by her Jewish immigrant parents, grew up in Brooklyn and then San Francisco where the family moved when she was a teen. Her father was a baker and she learned the skill from him. Still Sadie had an obsession with the stage and at the age of 16 ran away with a theater group. It toured hundreds of cities throughout the west and ultimately landed her in Tombstone where she soon became the mistress of the Irish Town Sheriff, Johnny Behan.

In reading “Epitaph” we were constantly reminded of scenes from the wonderful film “Tombstone” which starred Kurt Russell as Wyatt Earp and Val Kilmer as Doc Holliday. Yet Russell’s story rips away the sanitized Hollywood version for a more historically accurate portrayal of the Earp wives to include Sadie. She also delves into the psychological backgrounds of Wyatt, a quiet solitary figure, and the tragic melancholy Doc, a dentist turned gunfighter. In doing so she fills in so many gaps no mere two hour movie could ever reveal and offers up a very real, haunting story. One we thoroughly enjoyed and won’t soon forget.

THE NINE NATIONS - Book One - The Sliding World 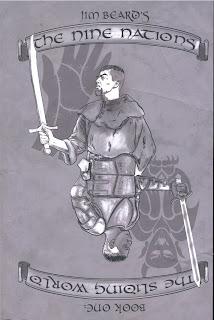 Book One – The Sliding World

The truth is we are not big fantasy readers. Oh sure, being involved with pulpdom, we’ve read our share of Robert E. Howard’s Conan and Charles Saunders African mythology books but not a whole lot more. In fact, we tend to avoid the genre these days in the place of masked avengers and noir mysteries. So why this one? Well, in all honesty because the author is someone of unusual talent whose past efforts have always entertained us. We opted to give it a go.

At the start of the tale, we learn that things are rather bleak in the world of the Nine Nations. Apparently the land mass upon which the varied countries are situated is actually sliding over the edge of a bottomless abyss. It’s as if Mother Nature has decided to destroy human kind and nothing can stop this slide to oblivion. Amidst this dismal predicament, something happens in the land of Complin that predicates an unusual quest. A notorious thief has stolen a pendant that is somehow mystically connected to the land and its retrieval becomes King Green’s singular goal. To that end he assigns his General Ketch to put together a small group of warriors and take the Warrior’s Road through other nations on a quest to find the pendant.

Ketch chooses an odd assortment of male mercenaries and a group of fierce maiden Horse Wardens of Uzzlin.  As this is transpiring, the King orders his chief law enforcer, High Warrant Jon Torck to accompany a magician named Stoan and a separate mission. It is the King’s belief that the mage may be able to divine a way to end the slide and save civilization. Torck, who abhors any kind of idol worship and mumbo-jumbo, is reluctant but acquiesces due to his staunch loyalty. Their journey leads them to the mysterious uninhabited zone known as the Graylands where nothing lives; not animal, vegetation or human. There, Torck will meet his destiny head on.

As ever, Jim Beard has woven a totally original story unlike any other sword and sorcery adventure. It is filled with intriguing, complex characters and the pace is relentless from beginning to end. Oh sure, there are the required fantasy elements, but it is how he weaves them into his narrative that we found refreshing. Like all good sagas, Book One ends on a cliffhanger and we are looking forward to it with relish. Don’t let us down now, Mr. Beard. We’re having too much fun. 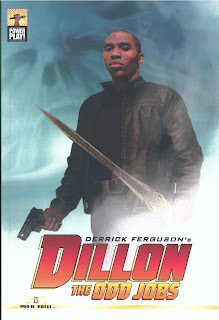 Created by the late Derrick Ferguson, the modern day adventurer known as Dillon was one of the very first black pulp heroes to arrive on the New Pulp scene. Over the past decade Ferguson gave us lots of books, short stories and even a comic strip starring his stalwart hero. In the process, as most writers do, he created lots of amazing supporting characters along the way while building up a huge and devoted fan base. Thus it was only logically when one day he openly invited his writing colleagues to contribute stories to Dillon’s world. Four daring, and super talented scribes accepted the challenge and this wonderful book is the result of their efforts.

“Dillon and the City of Stone,” by Erik Fromme is the longest tale in the collection and a really terrific adventure. Fromme’s handling of Dillon is wonderful as he clearly knows the character and his nuances and is obviously having a great deal of fun with this story about Dillon’s running off to a small Mexican village for a little R & R. Isn’t often the globe trotting hero gets to simply chill with good, decent people living dull, unexciting lives. Right. Of course this idyllic vacation is interrupted when several of the village’s women and children up weird looking night raiders and carried off into the surrounding jungles. All of which leads Dillon and two brave villagers to a trail that will take them into a long lost underground city. Oh yeah, this Dillon pulp all the way.

Up next is “Dire Learning” by Russ Anderson Jr. reintroduces us to Mrs. Allie Pierri and her teenage son, Shon. Allie works for as an agent for the French Ministry of Defense and Shon, having been trained from an early age, often assist on her mission. They first appeared in the Dillon comic strip “Escape From Tosegio” and then had a major part in the book “Dillon and the Pirates of Xonira.” In this outing, Allie disappears while investigating a prestigious French secondary school. Unaware his mother is being held by a former ally turned assassin, Shon manages to get into the school as an exchange student to try and find her. In the end, both of them uncover embezzlement on the part of the Head Mistress while at the same time foiling a political assignation. This is another gem with both teenage hijinks and espionage mixed together well. Shaken, not stirred, Mr. Anderson. Bravo.

In “Dillon and the Sisters of the Machine,” Joel Jenkins picks up our hero Xonira after its bloody civil war hoping to find a little piece and quiet. Instead he’s the target of a self-aware computer calling itself the Great Machine. It unleashes four sexy female Terminator-like killers to eliminate Dillon before he can thwart the Great Machines world domination. It’s James Cameron country and Jenkins does it justice.

“Dillon and the Devil’s Mercy,” is the final tale as written by Mark Bousquet and has Dillon traveling to Zurich, Switzerland to help Idell Creed, the son of his beloved mentor, Eil Creed. There he encounters an ancient Russian myth, a plot to capture rich oil fields and a claustrophobic underwater adventure that would make James Bond proud. All in all a dandy fast paced thriller and marvelous addition to the volume.

“Dillon and the Writer’s Circle” is a look at the contributors’ bios and an informal history of Derrick Ferguson’s career focusing on the creation of his greatest character Dillon. It is a reminder of what we’ve lost with his passing. Though he may no long with us, his Dillon books are still out there. Do yourself a big favor and go read them now. You’ll be happier for it.