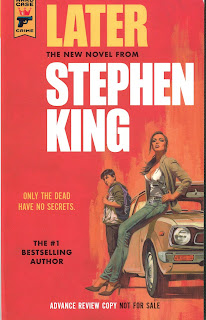 “I see dead people.” That classic movie line jumps at us fast upon delving into Master of the Bizarre’s latest story. Only this time, it is the child with the unenviable talent narrating the tale. Jamie Conklin lives with his single mother, Tia, in New York City. She owns and manages a Literary Agency (people who sell writers’ books to publishers) while overseeing the care of her older brother Harry. He’s committed to a sanitarium suffering from Alzheimer.

When Tia eventually learns what her son can do, she forbids him to tell anyone. Jamie not only sees the recently deceased, but before they fade away entirely into oblivion, he can speak with them. Thus allowing him to question them on topics such as who they were in life, or where did they keep their wills? Is there any message they’d care to relate to loved ones? You get the idea. Jamie eventually accepts his ability as just another normal aspect of their lives. All of that changes when Tia becomes romantically with a police detective named Elizabeth Dutton. Because of their intimate relationship, Liz learns of Jamie’s abilities much their ultimate regret.

Liz finds a way to exploit Jamie’s connection to the dead for her own shady purposes. All which leads to the boy’s confrontation with a dead mad-bomber who doesn’t fade away like all the previous souls. Rather this entity is able to follow Jamie and thus haunt him in a truly frightening demonic way.

As always, King spins his yarn fast and easy, with his uncanny ability to use words in painting both scenes and feelings. It’s a magic trick because while reading along, we began to ask the one question he cleverly attempts to avoid throughout the story. That is until it becomes his final surprise. The elephant in the thriller room. “Later” is seasoned King while reminding us a great deal of his earlier books when he was still new at the game.