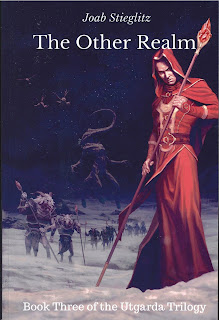 “The Other Realm,” is as enjoyable as the first two books and the added genre twist gives it a surprising romp we were not expecting. At the conclusion the author sets the stage for possible future adventures with O’Malley, Rykoy and Lamb. We’d like nothing better.
Posted by Ron Fortier at 9:42 AM 0 comments 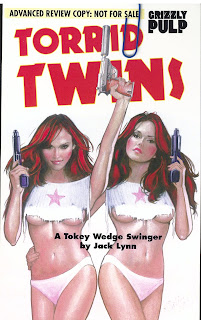 “Torrid Twins” is so true to its sweat-mags roots as to propel the reader on a pulp time-travel adventure. The raunchy humor, the two fisted punches and the flying hot-lead resound with genuine authenticity from a time long gone. If you recall those days with fondness and need a good laugh, grab a copy. As Tokey might say, “It’s a handful of action.”
Posted by Ron Fortier at 2:01 PM 1 comments

JACE OF THE JUNGLE 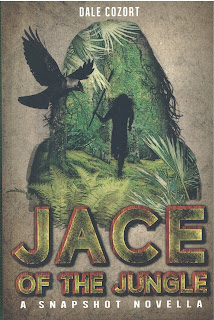 I’ve been a big fan of writer Dale Cozort’s unique Snapshot books since the start. In them he envisioned an all powerful race of aliens who could duplicate any part of human history on our planet and duplicate it perfectly, molecule for molecule. Imagine these god-like beings creating an exact duplicate of Argentina in 1920, meaning everything in that country at that time would then exist in a bubble…while the original Argentina would still exist here on Earth. Thus there would be two, with the “snapshot” double now at the whims of these aliens, where by they could attach that bubble to another that might contain France in 1955 and then allow the people in both bubbles to cross a zone tunnel and interact.

Okay, so yes, it gives us headaches too. The thing is Cozort is crafty enough to use this world building to his story-telling advantage. In his latest Snapshot Novella, “Jace of the Jungle” he totally goes all Edgar Rice Burroughs with a young eleven year old white boy living in a hodge-podge Africa that features ape-people, Roman Legions, lost cities and dinosaurs. See what I mean? This is pulp-weaving and he pulls it off with so much fun and enthusiasm, this little 121 pg book is a tease appetizer leaving us wanting a whole lot more.

Like ERB? Like romantic jungle adventures? Like action and adventure galore? Then what are you waiting for? “Jace of the Jungle” is waiting for you.
Posted by Ron Fortier at 3:28 PM 0 comments