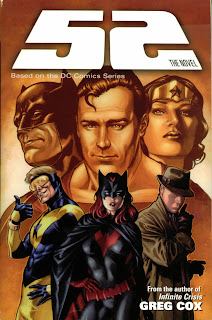 Comic book heroes are by necessity larger than life. The visual identity of the graphic story lends itself to modern myth building as laid out by a particular artist. Whereas a novel will explore the world of the fantastic through the use of pure imagination. For years comic fans have argued the relative value of each element and its importance to the whole. What is more important, the story or the art?

With Greg Cox’s novelization of DC’s mega series, 52, we are given an entirely different interpretation of a once told tale. It is an interpretation I found both insightful and wonderfully entertaining. Having not seen the year long comic series it was based on, I was able to enjoy this book on its merits alone. Thus is my review aimed and not on the comics.

For reasons explained in a previous storyline, the world’s three most famous superheroes, Superman, Batman, and Wonder Woman, have taken a self-imposed leave of absence.
Their sabbatical is public knowledge and the criminal elements of the world seize upon this as a golden opportunity. One such villain, mobster Bruno Mannheim, using stolen alien weapons and black magic, launches a two-fold diabolical scheme. The first is to gain control of . The second, more grandiose plot, is to recruit the god-like Arab dictator, Black Adam and turn his country of Kahdaq into a haven for criminals and terrorists. Meanwhile something strange is happening to the very fabric of time that threatens to destroy the universe.

These threats are met and challenged by three very different and unique heroes. Booster Gold, himself a time-traveler from the future, is perfectly suited to take on the enigma plaguing the time continuum. In doing so he encounters a brand new hero calling himself Supernova. At first Booster believes the new mystery man to be an ally, but events soon transpire that lead him to wonder if this new player is really the true menace he is attempting to uncover.

Meanwhile, a former detective, Renee Montoya, is recruited, against her wishes, by a faceless entity in a trench coat and fedora known as the Question. It is this noirish truth-seeker who reveals to her Boss Mannheim’s plot to take over the city. No sooner do they begin their attack on the gangster’s beast-men soldiers then they are joined by a startling new fighter in an all too familiar get-up. Enter the beautiful and dangerous Batwoman, who Montoya soon learns is her former lesbian lover, socialite Katherine Kane.

At the same time, over in Kahdaq, Black Adam, a one-time foe of Captain Marvel, is undergoing tremendous psychological changes. He falls in love with a slave girl who is then transformed into the hero, Isis. Then he and Isis save her brother from the same slavers and the boy is transformed into a junior version of Black Adam, calling himself Osiris. For the first time in his immortal existence, Black Adam believes he has found true happiness. But his joy is short-lived when his new family becomes the target of a group of super-villain scientists under ’s employ.

To his credit, Cox juggles these complex and intertwining plots like so many glass balls, always keeping them moving and spinning at the same time without a single misstep. His handling of each of the many characters in this mega-saga is true to their illustrious backgrounds. He propels the action with an economy of words that I appreciated and what looks like a big book is easily devoured in no time. 52 is a terrific adaptation and stands on its own merits as a powerful tale of good versus evil. In the end, isn’t that what all good superhero adventures are all about? 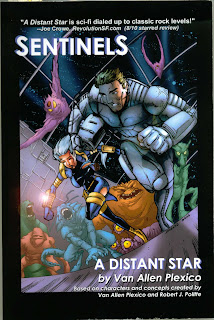 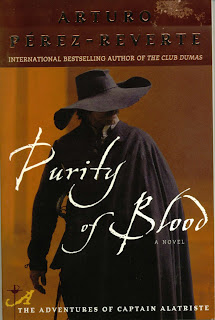 In this day and age there are far too few swashbuckling adventures available. I can remember growing up in the 60s being able to watch old Errol Flynn movies, or read wonderful costume classics like Dumas’s The Three Musketeers or The Man in the Iron Mask and the more modern pirate tales of Raphael Sabbatini. It seemed like the only such costume fiction being produced these days were those sugar-sweet Harlequin Romances. Thus I was overjoyed to discover this novel by Spanish writer, Arturo Perez-Reverte.

It is one of series featuring a master swordsman named Captain Diego Alatriste. This veteran of the Flanders War earns a peacetime living as a hired sword to whoever can pay him. Perez-Reverte does an excellent job of recreating historical and he populates it with both real and fictional figures equally well. Sometimes when a book is translated from its original language, its tempo and atmosphere suffer. That is not the case here, as translator Margaret Sayers Peden offers up a skillful interpretation which maintains the poetic ebb and flow of Perez-Reverte’s narrative.

In this adventure, Captain Alatriste is employed to help rescue a young woman from a nunnery where she is being sexually abused. Because of a debt of honor, Alatriste reluctantly accepts the assignment, despite his intuitive misgivings. Sure enough, during the execution of the mission, he and his companions are betrayed. Although he manages to escape, his ward, the thirteen year old Inigo Balboa, is not so lucky. The boy is captured by one of Alatriste’s deadliest foes and delivered into the hands of the Holy Inquisition. Locked in the dank dungeons of the by sadistic priests, the lad is framed and convicted of being Jewish; a crime punishable by death.

When Alatriste learns of his fate, he must call upon certain allies in high places to help him save Inigo. Unless he can produce a miracle within a few short days, the boy will be burned at the stake in the town square. PURITY OF BLOOD is a rollicking, old fashion adventure done with a new twist and set in an intriguing time and background. There are plenty of sword fights, back alley ambushes and cunning conspiracies at every turn. All of which test Alatriste mettle to the brink of death.

If you too long for these kind of long forgotten thrills, I strongly urge you to pick up PURITY BLOOD. I can almost guarantee, once you do, you will soon be hunting up the earlier books in this series. Just like me. 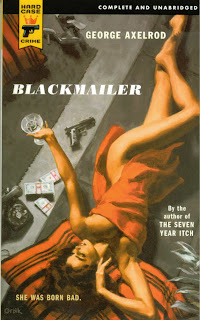 The covers on this book informed us that writer, George Axelrod, wrote some fairly well known movie scripts; The Manchurian Candidate, Breakfast at Tiffany’s and the Seven Year Itch. When I first read this, I wondered at the disparity of the genres. Consider they range from tense, no-nonsense political thriller to a lighthearted romance and an off-the-wall, goof-ball comedy.

What happens with Blackmailer is that Axelrod incorporates many of these unlikely elements and the result is a disappointing stew with little to recommend it. As a murder mystery, it begins well and introduces us to some colorful, socialites who may or may not be crooked. A Hemingway-esque author has died leaving behind one last, unpublished novel. Now a former gangster, a movie sexpot and social dilettante all want to get their hands on it for one reason or another. Enter Dick Sherman, publisher and would be detective.

The pacing of the book is quick and it is an easy read, if unconvincing one. There are several problems with Blackmailer that are unredeemable. The book is terribly dated. Mysteries like this back in the 50s were common and figuring out who-done-it doesn’t require any effort at all. Never mind that that book’s actual cover serves to offer that solution immediately. Consider the tag line, “She Was Born Bad.” Since there are only two female characters in the plot, one blonde and the other a brunette…well. Were this a femme-fatale offering, that could be forgiven, but it is not. In this case it’s window dressing to disguise a lackluster offering.

It is extremely rare that any Hard Case Crime will miss the bulls-eye, bad sadly Blackmailer does.