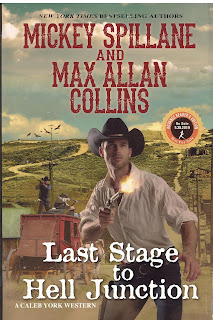 It is always fun to see writers known for a particular genre wander off into unknown territories. Which is exactly what transpired with mystery/crime writer Max Allan Collins took it upon himself to novelize a western movie script by the late Mickey Spillane. The result was four cowboy actioners featuring former gunfighter turned sheriff, Caleb York.

We read book one, a few years ago and thought it a very decent western. Having just finished the fourth in the series (yes, we know, we’ll have to find 2 & 3 eventually) we have to say Collins has adapted to the genre like a cowhand to his Stetson.

At the start of this novel, three of Trinidad’as most well known citizens board a stagecoach for Los Vegas from where they plan on catching a train to Denzer. One is Raymond Parker, an influential business man in the little New Mexico community. The others are rancher Willa Carter and saloon owner Rita Filley. Only a few miles out of town, the stagecoach is waylaid by the Hargrave gang, the driver and shotgun guard murdered and the passengers taken hostage. It is the outlaws’ plan to demand a hefty ransom from Parker’s business partners in Denver.

By the time Sheriff York learns of the incident, it is too late for him to successfully track the bandits. Somewhere in the nearby hills exist an old ghost town and a hotel that offers its services solely to outlaws. The Hargrave gang has made their headquarters and where they are holding their prisoners. Such outlaw lairs were not uncommon in the years after the Civil War. In fact there were actual documented histories of actual “outlaw” towns.

Once York does lean of Hell Junction, the rest of the book is focused on his out-thinking Hargrave and finding a way to rescue his friends, the two women especially dear to him. For a story that is somewhat claustrophobic in that it doesn’t cover a lot of ground, Collins manages to keep the narrative moving forward. As ever, just when we readers need some action, Caleb York’s .44 is there to provide it in a seamless fashion. This is solid story-telling with fascinating characters and could easily be transferred to the big screen by some enterprising movie producer. We can only wish. In the meantime we have the books and that in itself is a pleasure.

Now we don’t usually do this, but with this paperback edition we simply could not hide our distaste for the cover. Having grown up in the 50s and 60s, we were treated to western paperbacks that sported painted covers by some of the finest artists in the world, ala Robert McGinnis and many others. Whereas this title looks totally photo-shopped with the supposed hero looking like a Chippendale model from Beverly Hills. If we were female and a devotee of Harlequin romances, then we might it find it appealing. But not for a rough and tumble, old-fashion shootem-up. Publisher…take note.  Please.
Posted by Ron Fortier at 1:54 PM 0 comments 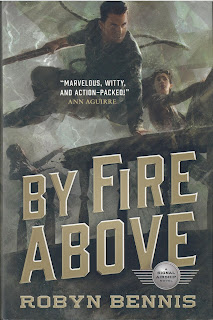 Bennis is one of the finest writers we’ve ever had the pleasure of discovering and her Mistral adventures exceptional in every way. Think C.S. Forester’s Horatio Hornblower in the sky and you’ll get the idea. If you love imaginative action, adventure and truly remarkable characters, please, do not miss “By Fire Above.”
Posted by Ron Fortier at 8:24 AM 0 comments