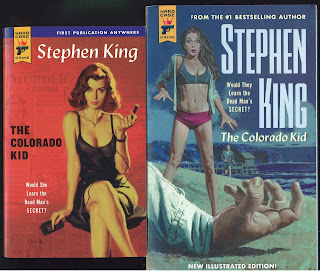 It’s not often we get to review the same book twice. But in this case, it is a task we relished greatly. Back in 2005 the newly arrived Hard Case Crime was shaking up the paperback scene with their series of hard-boiled crime novels; some classic reprints by long dead authors, others brand new tales by some of the leading mystery writers of the day. Though not noted particularly as a mystery novelist, Stephen King was approached to write a marketing blurb for one of their future releases. To the surprised delight of publisher Charles Ardai, King instead offered to submit a full manuscript entitled, “The Colorado Kid.”

We won’t bore you with the specifics; Ardai relates them in detail in his forward to this new, deluxe edition. What we will tell you is that back then we were most fortunate to be on their reviewers and one day the mail brought us a copy of King’s book. As memory serves, we read it in two days and wrote a glowing review. The book had struck a chord in us; one familiar with most writers. And so here we are, all these years later, sitting down to revisit this truly wonderful book in the hopes it will once again work its magic on us.

Stephanie is a college journalism student from mid-Ohio who has come to a little island off the coast Maine as part of a work-study program. Her bosses at the weekly paper are two old natives, Vince Teague and David Bowie, the publisher and editor respectively. Each is a veteran newshound with a whole lot to teach the eager young lady. During the course of their tutelage, they bring up the topic of unsolved mysteries and Steffi, as they call her, is instantly hooked. And so they tell her story of the Colorado Kid.

Twenty years earlier, the body of a man had been discovered on the beach by two teenage kids out for a morning jog. The body has no identification and as the story unfolds, uncovering that and other facts becomes a slow and laborious task. All the while, Steffi is mesmerized with each new scene her mentors relate. Still, at the offset, they warn her that the story of the Colorado Kid will frustrate her in the end. Why? Because is has no resolution.

And that dear readers is the genius of King’s offering; a mystery story left unsolved. Upon its first printing, “The Colorado Kid” did indeed raise up a loud hue and cry of “Foul!” Mystery fans weaned on traditional who-done-its naturally expected by the book’s finale there would be a solution; fully exposing of the killer and a fitting wrap up that would allow them to happily move on to the next read. Alas King wouldn’t play by those rules here. His goal was something much grander. He wanted to spin a yarn where the actual star was the mystery itself; in all its unanswerable splendor. By doing so, he reflects the truth of all our lives. For all the supposed control we have in living day to day, all of us are in fact characters in a cosmic mystery whose final chapter has yet to be written.
“The Colorado Kid,” remains a masterpiece of storytelling. It is rich in simple folksy wisdom and eerie in its underlying conceit. Under the normal lies the darkness and things that very much go bump in the night. Upon a second reading we come away even more delighted than ever.  Another personal note, when we read it the first time we lived along the Maine border in Southern New Hampshire. Today we live in Colorado. Go figure.

We also want to applaud the decision to add both a gorgeous new cover by Paul Mann and some amazing interior illustrations by Mark Edward Geyer and Kate Kelton. Now that’s pulp fiction!
Posted by Ron Fortier at 1:19 PM 0 comments 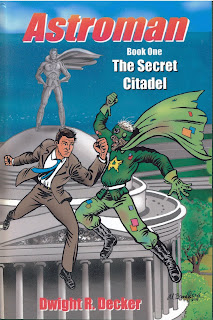 To learn the answer to this puzzle, Dawson is quickly caught up in more trouble than he could possibly have imagined. In the end, he wonders if being is super is really a blessing or a curse. “ASTROMAN – The Secret Citadel” is a well thought out exposition about what it means to be extraordinary and Decker explores the theme with so much enthusiasm, the book is a fun romp. But be warned, it is only the first half of a larger story though at its end we are promised the second part soon. Don’t let us down, Decker. This is really good stuff.
Posted by Ron Fortier at 11:27 AM 0 comments