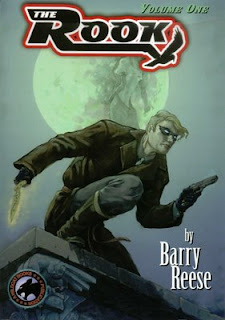 Before you start thinking this is a very small book because of the page count, let me add that the book’s format is 7 x 10 inches, much like the original pulp magazines. The pages feature a double column layout and there really is substantial text between the two covers. I’ll discuss the book’s design later, but first the contents.

The Rook, an original character, exist in the time of the classic heroes and in this, his first collection, crosses paths with several popular figures. The first is Richard Benson, the Avenger, and the second, with whom he shares a case, is the weird Moon Man from Ten Detective Aces. The Rook’s real identity is that of wealthy playboy, Max Davies and as this first volume begins, he’s transplanted himself to Atlanta, Georgia to escape the scrutiny of the New York police force. Of course trouble is going to follow him, no matter where the Rook sets his nest and soon he’s knee deep in zombies, vampire queens and ancient Egyptian magicians. There’s no lack of exotic, over the top villainy in these tales and Reese is clearly having much fun putting his hero through his paces.

At the same time there are allies, the most prominent being Hollywood B-movie star, Evelyn Gould, who, as the book transpires becomes the Rook’s lover and partner, sharing his wild and wooly adventures side by side. She’s a great character and marvelously realized. All the trappings of solid, classic purple prose are present in these five stories and except for a single misstep, Reese proves to be a masterful story-teller. My one and only critique is his permanently altering an established pulp hero. It was a joy to see Steve Thatcher, the Moon Man, team up with the Rook in the books’ fourth chapter, The Gasping Death, but when Reese ends the tale by having Thatcher marry his sweetheart, Sue McEwen, I cried foul! Classic characters should be kept as the writer found them, and thus available for future pulp-scribes to play with. Changing them is petty and selfish. Again, the only sour note in a truly sumptuous composition.

Finally, if you are going to paint a sexy woman’s image on the overhanging moon of the cover painting, then don’t go covering her up with the book’s logo! Storn A. Cook’s beautiful cover deserved much better respect than what it was given. Somebody at Wild Cat Books dropped the ball on this one.

Bottom line, The Rook – Vol. One is an excellent pulp offering and you should not miss it. Reese has already released a volume two and just recently a number three. I’m thrilled, and you can expect to see both of them reviewed here in due time.
Posted by Ron Fortier at 1:32 PM 6 comments 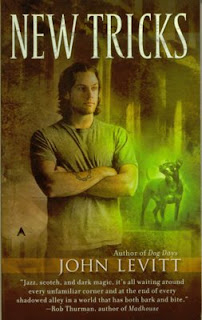 In the end, I’m still going to recommend picking up NEW TRICKS, but for the magical aspects of the book and the series as a whole. Levitt has left many things still unanswered about this pair and I am intrigued enough to stay with this. But because of the lame mystery element, this one gets only a marginal pass.
Posted by Ron Fortier at 11:26 AM 4 comments 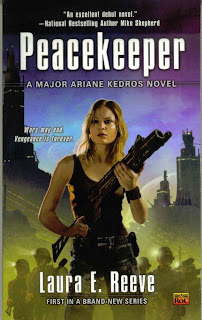 PEACEKEEPER moves along at a good clip with several mysterious sub-plots that include an alien race with their own secret agenda. There’s also the discovery of strange ancient ruins on a newly discovered planet and the murder of Matt’s business partner. How all these threads come together is dealt with quite nicely in this first chapter of Major Ariane Kedros’ adventures. Several plots are left open ended and I, for one, am eager to see where this is all going to go. This is good, old fashion science fiction with some great characters. You don’t want to pass it up.
Posted by Ron Fortier at 7:40 PM 2 comments