THE MYSTERY OF THE COWBOY SUMMIT 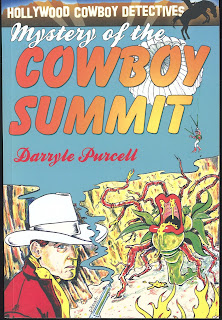 MYSTERY OF THE COWBOY SUMMIT

Okay, so right up front, we love this series by Arizona writer Darryle Purcell. The concept is a fun one and the action revolves around Republic Studios in the early 1940s. At that time they were pumping out B westerns super fast. Folks like Tom Mix, Gene Autry, and Tim McCoy were the childhood heroes of boys and girls across the country. Curly Woods is the studio’s flack, i.e. marketing rep with the task of promoting these horse operas and their stars via newsprint, radio and the popular newsreels. Curly’s boss is Rick Danby, an Executive Producer at the studio while his brother, Nick Danby, works as a chauffeur for the company. Curly and Nick are beer drinking buddies who regular chum around with silent film cowboy Hoot Gibson. The three of them are the principal protagonists in the series of which “The Mystery of the Cowboy Summit” is the tenth.

In each new book, Purcell often features cameos by other popular stars of the time. In this story, Federal Agents working for President Franklin Roosevelt have come to recruit the trio to be his “goodwill” ambassadors at a South American political summit to be held in Brazil. The affair will be attended by dozens of foreign business men from the surrounding countries and Roosevelt hopes to assure their allegiance should the war in Europe ultimately reach our shores. Knowing these cowboy personalities are recognized and admired throughout South America, Roosevelt believes they are the perfect envoys to win over these powerful financiers.

Tagging along this time is Buck Jones and Crash Corrigan. Of course like all previous capers, once in the Amazon jungles of Brazil, en-route to the fancy hacienda where the summit will be held, our guys soon learn there are other aspects of their mission the G-Men failed to mention. They find a field of giant corn inhabited by giant bugs, scorpions, worms and spiders. They are told this is all due to a super growth chemical invented by one Dr. Anita Lafond, a guest on the ranch. The idea is to supposedly perfect this potion and sell it to American farmers; the giant insects are a by-product not yet resolved. This is all well and good until they discover the ranch’s owners, Dom Sebastian and his sister Maria, may be German agents in cahoots with opium growing Arabs also in bed with Third Reich.

As ever it doesn’t take long for the action to ramp up and pretty soon our Cowboy envoys are in the battle of their lives attempting to stop thwart an insidious Nazis’ plan while at the same time having to rescue the innocent diplomats caught in the crossfire. Purcell, as in all his previous books, knows his history and depicts the characters with as much authenticity as his wild tale will allow. Himself an Army veteran of Vietnam, he’s familiar with weaponry and combat. He’s also proud patriot unashamed to cheer the old red, white and blue.

The Hollywood Cowboy Detectives series is one of the finest in New Pulp today. “The Mystery of the Cowboy Summit” is an excellent addition to it and now we can’t wait for the next one.