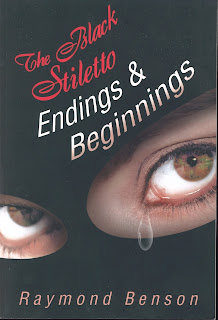 Sometimes a series is so damn good, we wish it would never end. Whereas going into Raymond Benson’s homage to old fashion comicbook superheroes, we knew that it would be told in five installments. From our initial delight at the first volume, each new chapter not only thrilled and entertained us, but at the same time saddened us as we could see the finale approaching.

Without repeating my reviews for the previous volumes, let’s get into how magnificent that ending is. The story picks up exactly where book four, “Secrets and Lies” left off. Judy Copper, aka as the masked vigilante Black Stiletto is in Los Angeles in 1962 involved with a handsome criminal named Leo Kelly. Kelly has aspirations to rise in the hierarchy of the Vegas mob run by brutal Italian family. But his beautiful, but psycho sister, Christina, isn’t willing to wait and disguised as the Black Stiletto, she murders the Boss’s daughter and later one of his top lieutenants.

Judy is trying to clear her name when she discovers she’s pregnant with Leo’s baby. That pretty much turns her world upside down. All this is told via Judy’s diaries now in the possession of her adult son, Martin Talbot. In present time, an aged Judy is confined to a senior facility suffering advanced Alzheimer’s and nearing her last days. When two criminal hitmen from Texas show up and nearly kill Martin, he realizes his mother’s past exploits are about to catch up with them. Meanwhile is own daughter, Gina, has become an expert in martial arts and reminds him all too much of his mother. When he finally reveals Judy’s secret to Gina, she volunteers to travel to Odessa and uncover exactly what happened there decades earlier.

Though most of the interweaving threads are predictable, that doesn’t in any way diminish their impact as Benson has created truly likeable characters that the reader comes to know and love. The last few chapters pack an emotional wallop that had us brushing back tears. This has been an exceptional series brilliantly told with heart and understanding. And there’s even an opportunity for a “new” Black Stiletto, one we truly hope Mr. Benson will explore some day.