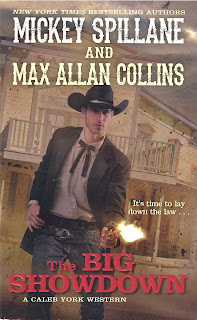 Several years ago we reviewed “The Legend of Caleb York.” It was an adaptation by Max Allan Collins of a movie screenplay by the late Mickey Spillane. We liked it a great deal and believe it was a one-shot at that time. Later we learned Collins had been persuaded to write four additional books featuring the gun fighting sheriff of Trinidad, New Mexico. Earlier in the year we received the fourth (The Last Stage to Hell Junction) and the fifth (Hot Lead, Cold Justice). Both were excellent and we said so in our respective reviews of each title.

Of course having now enjoyed three Caleb York oaters, there was no way we were going leave out the second and third entries. Our apologies for reviewing them out of chronicle order. Actually, Collins is so good at filling-in his readers with the start of each novel, readers needn’t worry. Each title stands on its own quite well. With “The Big Showdown,” we find ourselves arriving in the growing little town six months after the events of the first tale in which legendary gunfighter Caleb York rescued the community from the corrupt tyrannical sheriff Gauge and his band of killers. Having done so, he reluctantly accepted the sheriff’s badge until the citizen’s committee could appoint a qualified replacement.

It is York who recommends his old friend, Ben Wade for the job. Wade is an aging lawman looking for a peaceful town in which to settle and at the offset it seems like he and Trinidad were made for each other. That having been established, York is set to continue his journey to San Diego where he had hoped to sign on with the Pinkerton Detective Agency. Fate intervenes at the last minute when three masked men are caught in the act of robbing the local bank. In the ensuing gun battle, York manages to shoot of the robbers but the third, while making his speedy getaway, manages to shoot and kill Wade. Seeing his friend lying dead on the street, Caleb York vows to find the third crook and bring him to justice; be that a bullet or the hangman’s noose. At the same time retrieve the stolen money which was most of the town’s economic base.

Of course like any Max Collins tale, there is always a mystery to be dealt with. York becomes suspicious that the three men who committed the crime might have had help from an unknown source. No sooner begins his investigation when a new figure appears on the scene. He’s Zachary Gauge, a New York businessman and the last living heir to the former sheriff. It seems this Gauge has inherited his dead cousin’s estate. This includes several ranches and interests in many local enterprises. Then the new Gauge declares he will cover the bank’s losses with his own money, which quickly makes him very popular with towns folk; especially Willa Cullen, the daughter of a rancher with whom York is smitten.

As always, Collins moves his story along at a good clip and it’s obvious he’s enjoying himself bringing these iconic western characters to life. Each and everyone one of them is a familiar player to those of us who love westerns and he does them perfectly. The dialog is both amusing and lively and the shoot-outs brutally vivid. “The Big Showdown” deserves its title and then some. So saddle up, readers. This one is another keeper.