THE GUNS OF PLUTO 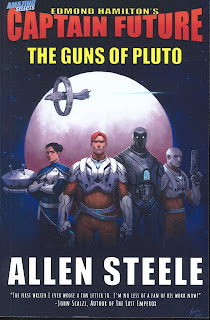 The GUNS OF PLUTO

We first discovered sci-fi writer Edmond Hamilton while in high school and immediately became a fan of his unique action/adventure stories. Unlike the hard science fiction of writers like Isaac Asimov and Arthur C. Clarke, Hamilton gave us Flash Gordon – Buck Rogers style tales we later learned to identify as “space operas.” As time went on we read more and more of Hamilton’s work but these were the 60s and we simply were unfamiliar at that time with his sci-fi pulp hero, Captain Future. The closest we came to that part of his legacy was when he created the Star Wolf series for a paperback outfit. We find it odd that in his bio at the back of this volume, that particular series is totally forgotten.

But we digress. Fact is during the heyday of the pulps Hamilton created Curt Newton, a tough as nails science hero and his team; a robot, a cyborg and an encased human brain. They were known as the Futuremen and over time their adventures brought about a truly loyal fanbase. One of these was writer Allen Steele who dreamed of one day writing new Captain Future novels. This book is part of that dream fulfillment. Although we should mention it is not first Captain Future book he wrote. That was published by another publisher and if you’re lucky, you might find copies at second-hand retailers via Amazon. For now, our focus is on this now on-going series established by the folks operating under the famous Amazing Stories banner.

In “The Guns of Pluto,” one of Newton’s old foes, the Black Pirate, attacks an interplanetary prison on the frozen planet. He then sends a message back to our hero claiming to hold two important hostages who will be executed unless Captain Future arrives on the site within the next twenty-four hours. Naturally Newton and his allies know the Black Pirate has an ulterior motive, other than simply besting his nemesis. What that is can only be uncovered if Captain Future acquiesces to his demands and thus begins the adventure.

Sure enough, once on Pluto, there are betrayals and surprises in store for our hero and his Futuremen. Eventually they learn the Black Pirate’s plan; a daring space voyage that if it succeeds will have severe consequences for the entire galaxy. Like all the classic pulps of old, “The Guns of Pluto” is a fast paced, rollicking adventure and Steele’s re-imagining of the Futermen is terrific. His writing has a sophisticated edge we truly believe Hamilton would have happily approved of. Just one note of caution, loyal readers. The book does not have an ending but climaxes with a cliffhanger to be resolved in the next volume. This may turn some of you away, but for this reviewer, it was a marvelous tease that worked. We cannot wait for the next installment.