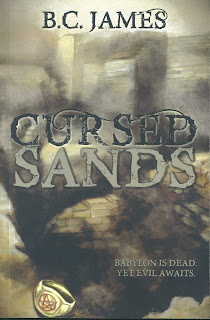 Having read some of our reviews, writer B.C. James send along his self-published “Cursed Sands” asking if we’d read and review it. Coming in at only 96 pgs, this volume is a novella which gives proof to the old adage, “Big things come in small packages.” In those 96 pages, James packs enough action and adventure to equal any of the currently bloated bestselling paperbacks on the market today.

The setting is Iraq today and four members of an American military squad are traveling through the desert when they are attacked by terrorists. After firing several shots, the black-clad enemy runs away and Corporal Kace McCrae suspects the soft-contact was simply a ploy to lead them into an ambush. The shooters have fled into the ruins of the ancient city of Babylon. Being a one time seminary student, Kace is aware of the city’s history and curse. Still, his men support his decision to pursue the enemy. Leaving their armored vehicle behind, they enter the ruins.

Immediately upon doing so, they find themselves caught in an alternate reality as other buildings and edifices suddenly materialize all around them. With them come living nightmares actually culled from their own imaginations. When one of them is brutally murdered, the three remaining soldiers realize they are now battling the supernatural. Their new battleground is home to weird, twisted demons who take pleasure in torturing their victims.

Throughout the tale, James never lets the pacing lag, propelling his narrative along while at the same time expertly defining his characters so that in a relatively short time, we found ourselves rooting for them. There is also a healthy does of humor that is very indicative of men in combat, a dark gravesite jesting that adds another layer to an already terrific read.  Will Cpl. McCrae and his men survive? And if so, how? “Cursed Sands” is pure pulp, loyal readers and we enjoyed every single page of it. You will too.