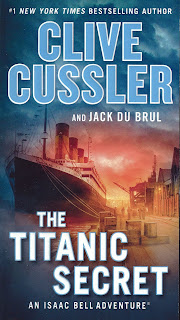 In 1973, Clive Cussler, the master of modern pulp fiction, wrote “Raise the Titanic” as part of his popular Dirk Pitt underwater adventures series. It was a huge hit and would become the first of only two Dirk Pitt books to ever be made into a movie. The other was “Sahara” many years later. But we digress. In “Raise the Titanic” Pitt is charged with not only finding the famous ocean liner’s resting place, but bringing it up all to retrieve thousands of pounds of a rare metal lying in the ship’s vaults. Metal that had been mined by nine Coloradans working for the French government believing its radioactive properties would be extremely valuable. Of course Pitt succeeds and the old ship manages to conclude its voyage, arriving in New York where American agents are waiting to take possession of the ore. End of story. Or so we all thought.

Jump ahead a few decades and the ever creative Cussler invents a new hero in detective Isaac Bell, who lived and worked during the turn of the century. After his debut in the novel “The Chase,” Cussler then handed over the reins of the Bell adventures to the very capable Justin Scott. Scott would do nine Isaac Bell books before Cussler’s passing last year. Considering the Isaac Bell series was only one of several such spin-off series being produced, fans and reviewers alike had to wonder if any of them would continue now that Cussler was gone. Before his death, he had brought his own son, Dirk Cussler, on board to cowrite the Dirk Pitt books and we assume the younger Cussler will keep that flagship series alive. But what about the others?

Well “The Titanic Secret” is a partial answer, though it does raise a few other questions. Not only is it a new Bell story, but it is one that actually ties in with unanswered plot holes from the classic “Raise the Titanic.” It goes much further into the background of who those nine Colorado miners were, how they came to be involved with the project and Isaac Bell’s part in rescuing them from the frigid coast of Siberia and the action packed odyssey they undertake to reach England to see the ore loaded on that ill-fated trip. The other intriguing issue is it the fact that the book is authored not by Scott, but by another Cussler long-time collaborator, Jack Du Brul. Readers of the Oregon Files series will be familiar with Du Brul’s name; he’s penned six of those.

This was our first introduction to his fiction and we came away truly impressed. “The Titanic Secret” moves at breakneck speed from the Rocky Mountains, to the Paris, then the fjords of Norway to the coast of Siberia, the Scottish countryside and finally the docks of England without let up. Granted, Du Brul’s take on the character of Bell is not exactly as we’ve become familiar with via Justin Scott’s interpretation. There’s less finesse and unlike his own series, he pretty much goes it solo in this book. Still, it works and we applaud it as a great new addition to the series as a whole. That Cussler would have planned this strange interaction between his two most amazing heroes, Dirk Pitt and Isaac Bell, though they lived in different times, is truly wonderful and in the end a treat for all lovers of great adventure fiction. Cussler fans will revel in delight. We sure as hell did.