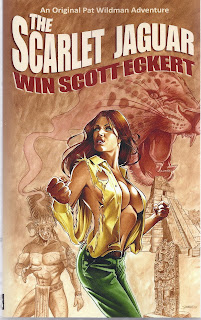 For the uninitiated, Farmer postulated this fantastic idea that all the famous heroes and villains of the 19th and 20th Centuries for related by blood tracing their common ancestry to a dozen English men and women who had become exposed to a strange meteor’s radiation when it crashed by their carriages in a place called Wold Newton.  From that beginning these men and women became the originators of incredible heroes to include Tarzan, Sherlock Holmes, the Shadow and the Spider, Captain Nemo, the Avenger, Phineas Fogg and the list goes on and on and on.  Well, you get the idea.

Whereas most of these fictional personages were licensed properties, Farmer could not use them in his fiction.  He solved this problem by giving them different names while clearly describing them so as to be recognized by readers.  Thus Doc Savage in the Wold Newton universe became Doc Wildman; he married and had a daughter named Pat.  Farmer had begun to write a Pat Wildman novel, “The Evil of Pemberley House,” but passed away before completing it.  That task was left to his loyal and talented protégé, Win Scott Eckert.  That book met with both public and critical success.  Now Eckert takes over the reins with this new tale and Pat Wildman couldn’t be in more capable hands.

Looking like a very alluring female version of her famous father, complete with a near perfect physique of a bronze hue and gold-flecked eyes, Pat and her British partner, Peter Parker own and manage Empire State Investigations using her inherited Pemberley Mansion as their headquarters. Soon after a very distraught young woman arrives on their doorstep asking their aid in finding her missing father, a British envoy to a small South American country, they are attacked by a bizarre menace that turns people into red glass and then shatters them.  Soon Pat, Peter and their client are winging their way to upstate New York where she plans on arming herself with some of her father’s powerful weapons before moving on to their final destination, the country known as Xibum.

No sooner do they land in the states then they are set upon by mercenary killers working for a twisted villain known as the Scarlett Jaguar.  Pat soon discovers this fiend has threatened to destroy the Panama Canal with his mysterious ray unless the entire country of Xibum is ceded to him by the British government.  Now their quest to find the missing dignitary becomes a deadly race against time.  Once in Xibum, Pat begins to learn long lost secrets of her renowned sire’s past adventures.  But can she take on his heroic legacy and save the day?

Eckert skillfully whips up a truly fun tale that blends both the sensibilities of classic pulp fare with some wonderful seventies James Bond touches that the savvy reader will recognize instantly.  It’s a heady mash-up that works extremely well.  “The Scarlett Jaguar” is a terrific new pulp actioner you do not want to miss.

Just finished reading this myself!

Win Eckert has given us another fantastic ride in a world filled with all the things we love from the Hero pulps of the thirties and forties to the colorful, sexy spy movies and tv shows of the 60's and 70's!

Very well written! Fun and adventure at it's BEST!!!

Love these modern pulps. While you could argue that the writing is copy catting, I see it as an homage to a style of writing that was largely ignored (by academia) but produced some of America's best writers. Give these a try, particularly this one. Great character; looking forward to reading more of her adventures.

If you love high adventure and the captivating allure of a true femme fatale, then THE SCARLET JAGUAR is the book for you!

This is a great book and it should be read by the producers and make a film of this great book of The Scarlet Jaguar. The article was really informative and the blog is full of details of this book.

I can't say a bad thing about this book. The book was incredibly amazing. Maybe this book was nice to be a movie. The story of this book is an action story and adventure. Maybe some producer may read this book and they will know why I think that this should be a movie soon.

Visit my site for site for Katami Bear said...