TALES FROM THE PULP SIDE 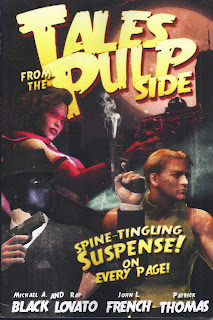 Every now and then a little book like this comes along and makes me happy to be a pulp fan/reviewer.  “Tales from the Pulp Side” is basically four seasoned new pulp writers coming together to present three rip-roaring pulp adventures featuring their own heroes; all of whom pay homage to the classics of the 1930s.

Up first is editor/writer John L. French’s “Wolf Hunt” featuring his Shadow-like avenger, Nightmare.  In this tale, millionaire playboy Michael Shaw has everyintention of giving up his second life as the gun-blasting vigilante Nightmare.  Alas, when a sadistic gang boss murders the District Attorney’s key witness and kidnaps the man’s two young sons, Shaw simply cannot sit idly by and watch evil triumph.  Reluctantly he dons his black regalia and once again hits the streets as the obsessed, unstoppable force for justice, the Nightmare.  This is a whopping good story.

Then comes one of the most audacious pulp characters ever envisioned, the Pink Reaper as written by Patrick Thomas in a story called “The Games People Play.”  Imagine the Domino Lady crossed with the old golden age comic Phantom Lady and you’ve a mild idea of this alluring creature who fights crime in a very, VERY skimpy pink outfit that leaves little to the imagination. Of course Kaye Chandler depends on her lush body to stop male crooks in their tracks making them instantly forget all else except her almost X-rated appearance.  Now to be fair, Kaye also wears an all black cape that, when folded about her, makes it possible for her to disappear into the shadows.  Made by her late inventor uncle, who was murdered, Kaye inherited his marvelous inventions and used them becoming a masked vigilante.  In this particular outing she deals with a new mysterious crime figure known as the Green Hood.  A master strategist, the Green Hood hopes to manipulate others to do his bidding, thus, even though she does foil his plan by the end of the yarn, he is still at large; obviously to reappear at a later date. Note, this story also gives us a glimpsed into the masked-hero shared world as built by these four imaginative writers.  Lots of heroes come and go, some we’d very much like to see again.

Finally the book wraps it all up with a really cool Doc Savage wannabe, Doc Atlas as created by Michael Black and Ray Lavato in “The Green Death.”  When a wealthy young man disappears in the South American jungles, Doc and his two aides, Mad Dog Deagan and Ace Assante head into this green hell to learn his whereabouts.  What they find instead is a secret Nazis base camp experimenting with a new terror drugs in hopes of resurrecting the “New” Third Reich.  Fast paced and full of pulp action, this was a pure joy to read and a fitting finale to a really great fiction package.

“Tales From The Pulpside,” delivers what it promises and then some.  Guaranteed to entertain any true pulp fan and hopefully help recruit many new ones along the way.  We would truly love to see more like this.
Posted by Ron Fortier at 9:59 AM

I've loved Patrick Thomas' writing for years. This bit of nostalgic noir gives me thrills and chills, and a taste of what it was like to be a superhero in the past. Well done, Patrick!