THE ELEPHANTS OF SHANGHAI 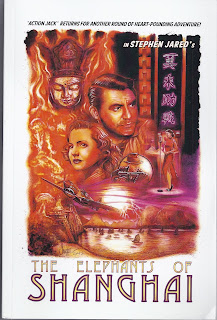 A while back actor Stephen Jared wrote a terrific pulp novel called, “Jack and the Jungle Lion,” which this reviewer totally enjoyed and recommended highly.  It told the story of Hollywood action hero, Jack Hunter, and how, while on a shoot in the jungles of South America, he met the lovely Maxine Daniels, fell in love and actually learned to be a real hero.  The first half of this book reprints that first adventure in its entirety before segueing into the second, a brand new story from which the book gets its title.  So if you are curious to read my thoughts on “Jack and the Jungle Lion,” feel free to search the archives here.  You should be able to find the entry easy enough.

Thus this review is about the new adventures of Jack and Maxine which are just as wild and crazy as the first.  It is 1942, five years since they returned from their jungle ordeal, married and went settled down to live on a spacious ranch in Texas. World War II is raging across the globe and democracy is threatened on all fronts.  Unbeknown to Max, Jack has gone to Chicago disguised as a two-bit hood to infiltrate the mobs because he has heard rumors they are in collusion with Japanese agents.  On his own, without any government sanctions, Jack has become a spy in the service of his country.  Gee, what could possibly go wrong with that idea?

Before you can whistle Yankee Doodle, he and a naïve would-be gangster named Johnny are sent to Shanghai by a crooked Senator to discover the hidden supply routes of the rebel Chinese forces.  The traitorous politician wishes to prove his loyalty to his new Japanese partners by revealing these much sought after routes and thus allow them to defeat both the Chinese and their American supporters.  What Jack doesn’t know is through a series of bizarre events, Max learns of his whereabouts and with the help of their old pilot buddy, Clancy, flies off to Shanghai to find out what the hell is going on with her quirky husband.

Of course once in Shanghai the action really heats up as Jack and Johnny quickly find themselves dealing with a brutal, sadistic Chinese warlord and a sultry Chinese femme fatale who not only recognizes the one time screen star, but then attempts to seduce him.  Which is when Max and Clancy show up.

Again, as he did in “Jack and the Jungle Lion,” Jared delivers a fast paced, old fashion adventure yarn peppered with just the perfect blend of hair-raising action and laugh aloud comedic bits to help lighten the tension.  Jack and Max are truly likeable characters and it is a treat to see them again as their continued romantic relationship shows no signs of ever getting dull.  Amen to that.
Posted by Ron Fortier at 10:57 AM