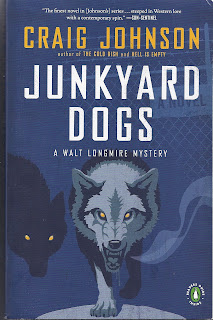 Happily one doesn’t have to read the Walt Longmire series in order to enjoy their levity, fast paced action and classic mystery formulas.  We should also point out that the highly popular television series, which is also a great deal of fun, is decidedly different from the books to make both unique and worthy of your attention for various reasons.

When the owner-manager of the local junkyard and landfill dies under mysterious reasons, Sheriff Longmire naturally suspects the big time land developer making noises to move the refuse facility.  But when that individual, upon escaping from custody, is shot to death in a small park in the middle of a snow blizzard, Longmire finds himself back to square one.

As anyone who has been following this series knows by now, the rugged high plains of Wyoming are as much a part of these tales as are the convoluted plots themselves.  Whereas with this particular case, poor old Longmire is really put through the physical ringer as he gets sprayed in the face with a heavy dose of Pepper Spray, bitten on the butt by a mean German Shepherd and in the end has a stack of scrapped automobiles dumped on him.  He somehow manages to survive all these challenges and bring the murderer to justice making him the quintessential western hero.

Of course this book has references to past exploits and although they don’t impede the enjoyment, they will make you want to go out and pick them up.  This is one series you won’t want to miss a single installment.