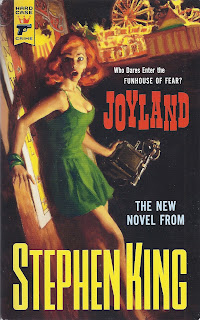 There was a time when this reviewer thought writer Stephen King could do no wrong.  His early works, though rough around the edges, still remain his strongest works. Somewhere in his struggling-writer’s soul, King had lots to tell us about those things that go bump in the night. Then, as often happens with success, his books became bloated with pretentious homilies. This reviewer prefers writers who are questioning rather than those who have all the answers.

Pointless social commentary such as his recent “Under the Dome” became thinly veiled sermons against the evils of conservatism; King is an avowed liberal and never misses a chance to snip at the other side.  We were beginning to think we’d never enjoy another good yarn by this once humble, innocent craftsman and then along comes “Joyland.”

Maybe the wisdom of age has settled into his creative bones.  His narrative voice here is steady and focused.  This is King eschewing politics and religion for a glimpse into the magic of every day life with his old insights sharper than ever.  His hero, whose voice he captures marvelously is young Devin Jones.  He has just finished his first year at the University of New Hampshire and suspects the love of his life, Wendy, is about to dump him.  Fearing the worse and unable to face it, Devin heads down to the shores of North Carolina to take a summer job working at an old amusement park called Joyland.  There he meets several other college kids, Tom and Erin, plus an assortment of wonderfully eccentric characters from the carnie folk who run the park to the Mrs.Shoplaw, the widow who manages the boarding house in which he and his new friends stay.

Within weeks of “learning the ropes,” Devin learns that the park’s haunted house ride was once the site of a gruesome murder and the ghost of the slain victim is believed to haunt the darkened tunnels within.  He also befriends Annie, a single mother raising her son Mike who is crippled by muscular dystrophy. Mike also is a bit psychic, as Dev soon learns.  Slowly the rigorous routine of daily manual labor and the congenial warmth of his new companions ease Devin’s heartbreak until he begins to accept life without Wendy may not be such a horrible fate after all.

But there is still the ghost in the haunted house, a mystery he and the lovely Erin begin to investigate.  They soon learn that the murder at Joyland was in fact one in a chain by a serial killer who hides in the vagabond world of carnivals.  At the same time, Dev begins to feel an attraction to Annie, each of them seeing through the other’s protective shell; she to devote herself to her son while he to avoid ever falling in love again.

King’s writing here is beautiful in its simplicity like an effortless poem.  It moves like the pace of beach tide, coming in and going out gracefully and ensnaring the reader with its hypnotic rhythms.  “Joyland,” though containing elements of horror and mystery, is really a coming-of-age story about innocence loss and the courage to see every new day for the miracle each contains.  In that it won me over completely.  “Joyland” is sure to become be one of Stephen King’s most enduring tales.  Spin the wheel and we’ll take a bet on that, even if we don’t win a kewpie doll.

I was going to swear off Stephen King after "The Dark Tower" series which was a major letdown but because I trust your reviews I'll give JOYLAND a try.

Egads, Derrick, now there's putting the pressure on me. Ha. But I do stand by my review. JOYLAND is a very welcome return to the Stephen King we've all missed so much these past few years.

With this book I remember why I fell in love with his writing 30 years ago! This book called to me like a carnival barker and I am so glad I went to the amusement park! Great read.

What a fabulous book King has written for our pleasure this summer. This story had everything in it. Coming of age (as others have said), horror, mystery, mystery. My only gripe is that it was short and I finished it way too quickly (kidding of course).

Unknown said...
This comment has been removed by the author.
5:30 AM

both excellent. In fact, after finishing this one I went on line and bought a couple more. Great writing, great premise.
I like this site :: Premier Automotive Fleet Service Kent