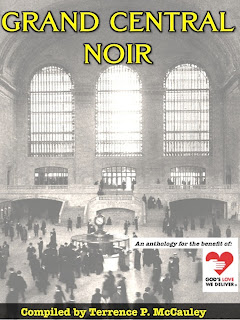 Okay, just bear with me for a few minutes, I cry your pardon. Those of you who have been good enough and indulgent enough to read my previous reviews both book and movie know that at times I can be somewhat long winded. But I assure you I do so for a reason and not because I’m in love with my own prose. And I’m trying to make a point here about GRAND CENTRAL NOIR that I think will illustrate exactly what I’m trying to get at when describing the feel of this anthology.

Most of you are familiar with Will Eisner and “The Spirit,” correct? Remember how every once in a while Mr. Eisner would tell stories that had nothing to do with The Spirit or maybe he would show up in the last panel or two simply because since the strip was titled after him he had to show up somewhere. In those standalone, Day In The Life stories, Mr. Eisner would tell short stories full of suspense, mystery, pathos, comedy, horror, crime or romance. Some of those stories were really very memorable. Well, at its best GRAND CENTRAL NOIR evokes the feel of some of those Will Eisner stories. And even when it’s not at its best, it reminded me of the “Naked City” TV show. Which also ain’t bad.

The concept behind GRAND CENTRAL NOIR is simple: all of the stories are set in New York’s Grand Central Terminal, the largest train station in the world celebrating its 100th birthday this year. I’ve been in Grand Central Terminal many times and it is truly one of the most magnificent structures in New York City. Thousands of people use The Terminal every day and just like they used to say on “Naked City,” they all have stories.
The stories in GRAND CENTRAL NOIR are crime stories but that doesn’t mean there’s no room for other elements to enter into these stories so that while crime is the driving force behind them, they certainly don’t all read the same. And that’s a testament to the talented writers that Terrence McCauley has compiled for this volume.

It’s never stated when I.A. Watson’s “Lost Property” takes place but it reads like a 1930’s screwball comedy/mystery and it’s an excellent choice to start the anthology with as it’s breezy, light and thanks to the rat-ta-tat-tat dialog a fun read with a conclusion that had me grinning from ear to ear.

“Train to Nowhere” by Charles Salzberg and Jessica Hall is set in modern day but it’s feel is very much that of classic noir. There’s a mystery to be solved here but I got the impression that the writers weren’t so much interested in the solution of the mystery as they were in evoking a certain mood and tone and they did indeed accomplish that.

For a while there I feared that Ron Fortier was telling me a shaggy dog story in “Fat Lip’s Revenge” but I should have known better. In the hands of an old pro like Ron it’s a story that at first appears to be going way out over there in the fields somewhere but once you get to the end you understand why Ron had to go out there to bring you back to here. Another story that had me grinning like an idiot by the end.

“Fortune” by S.A. Solomon ends just when it seems like it should be shifting into a higher gear. Not that it isn’t well written. It does a good job of getting into the head of the narrator but that ending is just too abrupt for me and left me feeling cheated out of a proper resolution to the story.

“Meet Me at the Clock” by R. Narvaez is a story that’s soaked in hopelessness right from the opening paragraphs. By the time Lew Conrad got on the train I knew that this story was not going to end well for him and I was right. And “Meet Me at the Clock” is one of several stories in the anthology that gave me the distinctive impression that the actual crime-related plot isn’t all that important to the writer. R. Narvaez is much more interested in exploring this day in the life of this second rater who deserves the fate he gets at the end of the story.

“Terminal Sweep Stakes” is what I like to call a Take No Prisoners Story. Amy Mars is telling a hard mean story about a hard mean man and she pulls no punches doing so. I have no idea if Grand Central Terminal has its own police force but the idea itself was fascinating enough to pull me into the story. The barbed wire and bourbon bite of the prose did the rest.

“Without a Hitch” by R.J. Westerhoff did have a couple of hitches for me. Including a time shift so abrupt and unclear that I actually wondered if somehow a chunk of story had been left out by accident. And the ending is way too anti-climactic and left me mumbling, “You mean that’s it’s?”

After reading J. Walt Layne’s “The Drop” you may be wondering where the crime element is as I did. I don’t think there is one and I don’t think Mr. Layne cares one bit. Again, this another story that I feel is much more interested in characterization and striving to craft a mood and atmosphere. This story feels ambitious, as if Mr. Layne was trying out a different type of storytelling from his usual style.

“A Primal Force” is a story about family and revenge that I admit I paid more attention to because I recently watched on Turner Classic Movies a really good biopic starring Ernest Borgnine about Joseph Petrosino, a New York City detective at the turn of the century who was put in charge of dealing with Italian criminal organizations such as The Black Hand. Petrosino and The Black Hand both play major roles in this story.

“Off Track” by Matt Hilton had me laughing out loud by the time I reached the end. Because it was a laugh that Mr. Hilton had truly earned as I admired the way he had me thinking one way and so smoothly turned the story completely around. The story’s like a great sleight of hand magic trick where the magician has you looking at one hand while he’s actually doing the trick with the other. One of my favorite stories in the book.

“Timetable For Crime” by Marcelle Thiebaux is another story I really enjoyed as I like heist stories where whoever is pulling off the heist gets away with it. Criminals are oftentimes so inept in real life that it’s downright fun to see a smart criminal in fiction pull off the perfect crime. A great story that barrels along full tilt boogie from start to finish and never sets a foot wrong once.

“Mary Mulligan” is a story that’s safely in the middle of the road. There’s nothing about it that really makes it stand out but there’s nothing wrong with it either. The prose by Jen Conley is pleasant to read and the situation plays itself out in a fairly straightforward manner with no embellishment or surprises. I like Jen Conley’s prose and wish she’d really swung for the fences in this one. Still, this story is good enough that after reading it I made a notation to look up some of her other stories.

“Spice” by Seamus Scanlon is another story that like “Fortune” and “Without A Hitch” ends just where it was getting goood and I was looking forward to where it was going to take me.

Terrence P. McCauley serves up the piping hot action of “Grand Central: Terminal” as if fully aware his responsibility as clean-up is to leave readers wishing there were more stories to read and he does it with a razor-sharp spy vs. spy story. It isn’t a long story but it does a very good job of conveying a larger world outside the borders and I can very easily see more stories about James Hicks and I would love to know more about The University. If you were a fan of ‘24’ then you’ll get right into this story and enjoy it as much as I did.

Before wrapping up this review I know that the writers would want me to point out that when you purchase a copy of GRAND CENTRAL NOIR you’ll be helping out a wonderful cause: God’s Love We Deliver is an organization dedicated to improving the health and quality of life of men, women and children living with HIV/AIDS, cancer and other serious illnesses. All proceeds from this book will be donated to God’s Love We Deliver. For more information about this organization and the amazing work that they are doing, please visit their website; https://www.glwd.org/.

So should you read GRAND CENTRAL NOIR? Sure you should. Not only will you be helping out a worthwhile cause but you’ll be getting eight stories out of fifteen that are absolutely first-rate. Call those the Will Eisner level good stories. The others are “Naked City” good which as I said earlier, still ain’t bad. Enjoy.