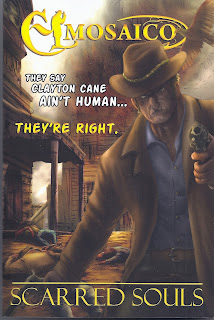 Sorry to sound like a broken record, but Michael Panush is rapidly becoming one of my favorite New Pulp writers.  Having discovered him via “Dinosaur Jazz,” a book we nominated for Best Pulp Novel of 2012, we then discovered his “Stein & Candle Detective Agency” series about two post-World War II occult detectives.  As if that isn’t enough to keep this prolific writer busy, now he’s launched as yet another series which can best be described as Frankenstein done western style.

During the Civil War, a Confederate doctor/occultist has the brilliant idea of stitching together body parts from dead soldiers and then animating them using black magic. His plan is to fill the rapidly diminishing ranks of Southern companies with these reanimated corpse soldiers.  He manages to create one such patchwork man before being killed by Union bombardment.  That one and only success is Clayton Cane.

Cane is a bounty hunter traveling the untamed west of the late 1860s and because his very nature is always encountering one fantastic monster after another in this first collection of adventures; there are eight total and each is a gem.

In “Bayou Bloodshed,” Cane is hired to find a black girl who has run off to a secluded island in the middle of the swamps.  The island is populated with two desperate clans; one of gatormen and the other of werewolves.  Needless to say, Cane’s mission is not an easy one.

Then Panush offers up “Red Blades of Whitechapel,” whereby his jigsaw hero end up in London to hunt down a serial killer with a royal pedigree.  Considering this story’s open-ended climax, the main villain could well return for a future encounter.

With “Dead Man’s Band,” Cane captures an outlaw alchemist named Black who leads a band of dead outlaws.  When these deceased desperados attack the hotel Cane is hold up in the pitched battle appears to be El Mosaico’s last stand.

“Monster Men of Malchite Falls” has the bizarre bounty hunter infiltrating a weird fortress laboratory in the middle of the dessert to rescue a little boy. What he discovers is another mad scientist much like the man who put him together.

In “Tomb of Kings” Clayton Cane is one again employed by the British Government to act as security for an archeological dig in Egypt. When the leader of the expedition unearths and revives the Nameless Pharaoh, Cane must ally himself with Arab dessert warriors to defeat an ancient army of monsters.

Back in the U.S. the man-made gunslinger is next hired by the cavalry to help down an old Indian shaman who may be unleashing an army of ghost braves to defend their land in the moving “Ghost Dances.”

In the seventh story, Cane travels south of the border hunting a gang of vicious stage coach robbers and teams up with a wily Mexican bandito named “Tarantula.”

Lastly Cane is hired by a foreign professor to help him track down the whereabouts of the Ragnorak Hammer before it can be used to destroy the world. When their hunt takes into a brutal Minnesota blizzard, they received unexpected aid from an immortal Viking legend.

“El Mosaico – Scarred Souls” is the epitome of New Pulp fun and originality.  It’s a dandy mash up of cowboys and creatures and the wise reader should saddle up and join Clayton Cane.  The ahead looks to be truly fantastic.

A fun western/zombie adventure romp with memorable characters and an exciting, twisty plot that will keep you turning the page.