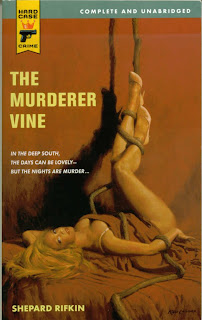 This is one hell of a good book. Unlike a lot of crime titles that aspire to the label of noire, this one delivers. It is a hard edged, brutal look at in the early sixties set against the backdrop of racial prejudice as it existed in the .

Joe Dunne is a Korean War veteran who makes a decent living as a private eye in . He’s even got a cute, blonde secretary named Kirby, a former peach. The trouble with Dunne is he’s wants more and that greed is his Achilles’ heel. When the son of a wealthy industrialist goes missing in while working on voter registration for blacks, his father believes he’s been murdered. He hires Dunne not only to prove that assumption, but to find the men responsible and kill them. In short order Dunne is promised half a million dollars to murder five men. He accepts the jobs.

Dunne meticulously plans the assignment by creating a bogus identity for himself and Kirby, who has convinced him to bring her along as proper Southern camouflage. She is not aware of his actual mission and assumes he’s only looking for the murderers. Of course once they arrive in the sleepy little community of Okalusa, Dunne must play the part of a bigot to ingratiate himself with the suspects, one of which is the town’s redneck sheriff. It is a repulsive role and he despises himself for having to assume it. Through Kirby, Dunne sees the South as it truly is, a divided land still nursing its wounds from a hundred year old war with the North.

Rifkin captures the atmosphere of the times perfectly and although it was easy to see the tragic ending half way through the book, that is what noir is all about. Noir stories are about being trapped on a runaway train whose tracks go off the cliff. You see the wreck coming and there’s nothing you, or the protagonist, can do about it. Noir is being a victim of fate and that’s the tragedy of Joe Dunne. It’s a fate he chose for himself.

This is one of the finest noir thrillers ever penned. Kudos to Hard Case Crime for bringing it back. It deserves a huge audience.

I didn't like it as much as you did, Ron. The whole thing felt rather artificial to me.

Hmm, odd choice of words, Glen. I obviously didn't get that feeling, but certainly one of fatalism from the very first page. And I generally don't like books I can figure out that early in the narration, but this one truly was compelling and bitter sweet in its conclusion.
Hang in there, HCC is getting ready to release both the First Quarry by Collins and The Max, the third chapter in Bruen and Starr's hilarious crime series following Bust & Slide. Looks to be two big winners.