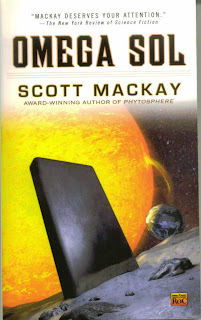 I enjoy all kinds of science fiction but all too often am put off by the sub-category referred to as “hard” sci-fi. You know, the kind written by real Phds who’ve graduated from M.I.T. with degrees in quantum-nano-whatever. Nine out of ten times, these geniuses from academia, although brilliant in their respective fields, have absolutely no idea of how to tell a story. Their books are filled with pages and pages of scientific jargon and speculation (remember the what-if part that makes it sci-fi in the first place) with absolutely no concept of characterization or plot development. Of course, what you always hope for when hunting through this genre is that one out of the ten; where the author not only knows his science, he or she also understands how to spin a damn good yarn.

Dr. Cameron Conrad is a physicist and mathematician on the moon about to begin an experiment in hyper-dimensionality which he believes will help unlock the secrets of the universe. Suddenly a giant monolith from the deepest reaches of outer space suddenly appears over them. So strong is its gravitational pull, it wreaks havoc with the Conrad’s field and completely destroys all his equipment. Within the next few hours, everyone stationed at the moon facility is caught up in the monumental puzzle of who or what the monolith is? Where did it come from? Is it really an alien construct and why is it here, in our Solar System?

Conrad is convinced the monolith represents First Contact and attempts to reach out to Builders, as he comes to label them. In the process he is pulled into the monolith and his brain altered. Meanwhile, back on Earth, the military has launched a response force led by a gung-ho marine hero, Colonel Pittman. Pittman is a soldier’s soldier and he lives for combat. He honestly believes the aliens pose a threat and when they begin to siphon hydrogen from our sun, a process which will result in the earth’s total annihilation, Pittman launches a nuclear assault against the monolith.

Meanwhile, recovering in a hospital back on Earth, Cameron, who experienced a very faint contact with the Builders, is convinced they are completely unaware of our existence. He argues we are no more than ants to them and unless he can find a way to make them aware of us, the Earth is doomed. Much of Mackay’s story adopts elements and scenarios from other classic science fiction adventures, notably Arthur C. Clarke’s A SPACE ODESSEY. But what makes his tale unique is his willingness to expand the borders of accepted scientific thinking into areas considered taboo. Mackay proposes that pushed to its limits, physics will eventually come to grips with incalculable math wherein instinct, intuition and yes, even faith will be required to solve the riddles of life. He suggests quite boldly that there is even more to reality than what we can measure with science.

The horrors that befall Earth during the events in OMEGA SOL are devastating and Mackay doesn’t shy away from detailing them accurately in a cautionary example of how truly fragile a basket mankind has store all its eggs. There are times in the book when he narrowly avoids stereotyping Cameron and Pittman as the hero and villain. That he does so and enriches both of them with self-doubts and disbelief is small part of the overall excellence of this book. When I first picked up OMEGA SOL, I allowed myself one chapter to determine if I would finish it or not. That I couldn’t put it down, is why I’m here to give OMEGA SOL major thumbs up.